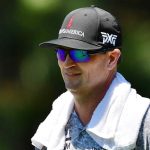 After missing three cuts in a row, Zach Johnson is in contention through two rounds of the 2021 Valspar Championship.

For most pros, missing the cut is no reason to celebrate. But according to two-time major champ Zach Johnson, failing to make the weekend at this year’s Masters was an important turning point for his game.

“I think that’s the beauty of Augusta is even if you play well there, but especially if you don’t play well there, it really magnifies exactly what you need to do, because you have to have everything on,” Johnson said on Friday, after firing a second-round 67 at the Valspar Championship to jump into T6. “It’s extreme in a good way. So I took missing the cut at Augusta with a distinct positive and that assessment was good and my team helped me with that.

“Right after Augusta I made some changes that feel like miles upon miles, but they’re really only about that far (Indicating),” Johnson continued. “And when I say ‘changes’ it’s really just kind of going back to what I’m accustomed to doing.”

For Johnson, those recent positive changes in his game can be attributed to an important fundamental: the grip.

“Going back to what I — this is going to sound ridiculous — but where my grips were a few years ago, if not further,” Johnson explained. “I’ve got a strong grip, and my grips have a reminder on them and they have been actually pretty neutral, if not strong. So when you combine a strong grip with a strong grip, the ball’s going to go left a lot. And now the grip sits open, my grip is a lot weaker because of where I put my hand on there, especially with my left hand, and I feel like I can play free. I can swing at it and it’s not going to go left too much. Which is freedom. So I’m not suggesting that it’s the end-all be-all, but I know it’s the right direction. So very encouraged.”

Johnson has 12 career Tour victories, and this week, broke a three-event, missing-the-cut streak that began a week before the Masters, at the Valero Texas Open. Prior to the Texas Open, Johnson made 14 straight cuts, dating all the way back to last August.