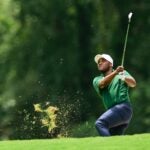 Harold Varner III shot a one-under 69 on Friday at the 2020 Wyndham Championship.

Now that the second round of the 2020 Wyndham Championship is complete, the field has been cut in half, with some players returning home and others sticking around to continue the fight on Saturday. Here’s everything you need to know to watch the third round.

After two rounds at the Wyndham, there’s a four-way tie atop the leaderboard. Si Woo Kim, Talor Gooch and Tom Hoge went low in the morning to reach 10 under, and then Billy Horschel joined them in the afternoon with a fine round of 64.

They’ll be best positioned to take home the title this weekend, but to do so they’ll need to hold it together during what is sure to be a volatile third round on Saturday. (Due to inclement weather forecasted for Saturday afternoon, third round starting times have been moved up. Competitors will now tee off in threesomes from 7-9 a.m. ET.)

One of the players they need to keep a close eye on is Harold Varner III. The first-round leader finished Friday at nine under, leaving him one off the lead. He’s looking for his first PGA Tour win this weekend.

Other players to look out for on Saturday at Sedgefield CC are PGA Championship runner-up Paul Casey (seven under), 2018 masters champion Patrick Reed (seven under) and 2019 Open champion Shane Lowry (nine under).

Below you will find all the information you need to watch Saturday’s third round of the 2020 Wyndham Championship.

How to watch Wyndham Championship Round 3 on TV

Originally, Golf Channel was to air the early third round action on Saturday from 1-3 p.m. ET, with CBS taking over for the heart of the round with four hours of coverage from 2-6 p.m. ET. With tee times moved up for Saturday, the Golf Channel coverage will now begin at 8:45 a.m. ET.

How to watch Wyndham Championship Round 3 online

You can stream the early third round Golf Channel broadcast of the Wyndham Championship on golfchannel.com. Fans can also view Featured Group coverage of the opening round all day Saturday via PGA Tour Live, though you will need a subscription to access both options. CBS’ afternoon TV coverage can be streamed at CBS.com/all-access.