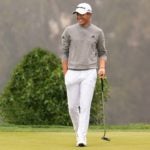 If anyone knows how to properly contextualize Collin Morikawa’s first major championship victory at only 23 years old, it’s Paul Casey. More than 20 years into his professional career, Casey has a top-10 finish in every major, and no wins.

On Sunday, the 43-year-old watched hopelessly as his stellar final-round 66 was leaderboard leap-frogged by a 64 from a player two decades his junior. When the dust settled, Casey finished tied for second at 11 under, two strokes back of Morikawa.

The script practically wrote itself: another year, and another deserving effort that fell just short. But after his round, Casey told reporters he’ll have no trouble sleeping at night.

“I just shot 66, and Collin shot 64 (shrugging shoulders),” he said. ” I had two bogeys and one double this week. There’s not a lot else I would change.”

In Casey’s mind, the real story was the young man who’d beaten him. Morikawa might only be 23, but it’s clear that he’s built differently.

“Instant maturity was probably the one thing that stood out,” Casey said. “I mean, you know, those — you’ve heard him talk. Very mature in the words he chooses, the way he speaks, the way he plays golf.”

Morikawa turned pro just over a year ago as one-third of a trio of young stars that included Matthew Wolff and Viktor Hovland. And while the latter two earned the lion’s share of media attention out of the gate, it was the west coast kid who caught the eye of more than a few Tour pros.

“There’s always a bunch of guys that rock up on the scene, and he didn’t necessarily get the most publicity out of the group he was in, but you know, I can consider myself veteran; I’ve been around the block, so I know talent when I see it,” Casey said. “Talent’s — you know something good. We could just tell.”

Morikawa might not yet have left the prologue of his professional career, but that hasn’t stopped Casey from making up his mind. The kid who beat him — and everyone — on Sunday at the PGA Championship has something special.

“Those of us who knew, knew that … he’s the one,” he said. “Even if the media weren’t talking — they were talking about him, but that’s where we were focusing our attention, and we weren’t wrong.”