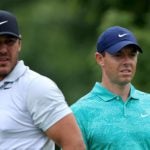 Rory McIlroy might not have wound up near the top of the leaderboard, but that didn't stop him from making headlines on Sunday at the PGA Championship.

On Saturday night, Brooks Koepka stepped up to the podium, aimed and fired. After a third-round 67 placed him two strokes off the lead, the four-time major champion lobbed a mortar shell at the top of the PGA Championship leaderboard, namely one-time major champion (and 54-hole leader) Dustin Johnson.

He wasn’t done there.

“I was glancing at the leaderboard and of the ten guys that are up there, there’s been, what, three majors?” he continued. “DJ has been in this spot a couple of times and he hasn’t been able to capitalize.”

McIlroy, who has four majors of his own, is known to speak his mind on a wide range of topics with media, from the state of his game to the affairs of fellow players. On Sunday, he went a step further, admitting he was none-too-pleased with Koepka’s prodding.

“I certainly try to respect everyone out here,” he said. “Everyone is a great player. If you’ve won a major championship, you’re a hell of a player. Doesn’t mean you’ve only won one; you’ve won one, and you’ve had to do a lot of good things to do that.”

McIlroy event went as far as to call into question Koepka’s own credentials in criticizing Johnson.

“Yeah, I mean, sort of hard to knock a guy that’s got 21 wins on the PGA Tour, which is three times what Brooks has,” he said.

Beyond the blistering response, Rory’s week was rather ho-hum. He finished Sunday’s round (and the tournament) at two under and never found himself in contention at Harding Park, the latest in a string of up-and-down performances. (“Maybe I’m just not as good as I used to be,” he offered sardonically.)

But heading into the final round at golf’s first major, it’s safe to say the reigning PGA Tour player of the year won’t be pulling for a Koepka three-peat.