How the World Long Drive format works: What Bryson DeChambeau needs to do to win 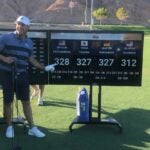 On the face of it, it seems wild, untethered: a bunch of big guys gathered in the desert, seeing who can bash a golf ball farthest.

But, of course, it’s an organized event.

The 2021 Professional Long Driver’s Association World Long Drive Championships (Bryson DeChambeau edition), which kicked off Tuesday and will wrap up Friday in Mesquite, Nev., abides by a format that marries elements of March Madness with playoff customs from other major sports. Rocket science? Nope. But not exactly second nature to most golf fans, either. A lot of us could use a primer. If you plan on watching the action (it’s being live-streamed here), here’s an explanation of how the format and scoring worked over the first two days of competition, and how the system will play out to the end.

Tuesday: Getting down to 64

Format: With 80 long drivers in the field to start, the players were divided into five groups of 16 for a series of knockout rounds, with the top 12 finishers in each group (a total of 60 players) automatically advancing. The 13th-place finisher in each group (five players altogether) then went into a wildcard round, with the four top finishers advancing to round out the group of 64. If you’re keeping score at home, DeChambeau breezed through this session, blasting five of his 30 attempts more than 400 yards to finish second in his group of 16.

Scoring system: If you tuned in on Tuesday, you might have thought you were watching synchronized hitting. You were right. In those knockout rounds, players took the tee four-at-a-time in a round robin format that ensured that all the players in each group got to compete against one another. Every player was given five hitting sessions. In each of those sessions, they had 2 minutes and 30 seconds to hit six balls, or 30 balls total. Points were awarded for longest ball, second longest ball, third longest ball, and so on. The cumulative score over those five sessions determined the final ranking in each group of 16.

Wednesday: Trimming the field to 32

Format: On the second day of competition, 64 players were divided into groups of 16, with the top 8 finishers in each group automatically advancing. There were no wildcard spots. In this stage of the competition, DeChambeau shined again, notching the longest drive in three of his five sessions, and placing second in the other two. It’s on to the final 32 for him.

Scoring system: Rinse and repeat from Tuesday night. Every player was given five hitting sessions, six balls per session, with the top eight cumulative scores moving on to the round of 16.

Format: With 32 players in the field Thursday, players will be split into two groups of 16, with the top 8 from each group advancing.

Scoring system: As in the first two days of the competition, every player will get five hitting sessions, six balls per session, 30 balls total, with cumulative scores determining who moves on. In each session, the same 2 minute and 30 second shot clock will apply.

Format: With 16 players remaining, the players will be divided into two groups of eight, with the top four from each group advancing.

Scoring system: works: Once again, every player in each group will hit a total of 30 balls over five sessions, with the the cumulative scores determining the final 8.

Format: Now that we’re down to just 8 players, the format shifts and things start moving faster. In this session, players will be split into two groups of four. But each player will hit just 6 balls total, with the two longest balls counting toward the final score. The top two finishers from each group will advance to the final four, where the same format will apply.

And the winner is?

Format: It’s mano-mano. Nothing fancy. Each finalist will get one hitting session, striking 6 balls in an allotted 2 minutes and 30 seconds. The longest single ball wins.