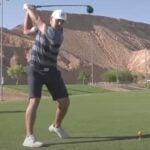 Bryson DeChambeau advanced out of the Round of 64 on Wednesday.

A day after advancing from the opening round into the Round of 64, DeChambeau is on to the next stage. He breezed through the second round of competition on Wednesday in Mesquite, Nev., advancing to Thursday’s Round of 32. And it wasn’t even that close. The top eight in each of the four groups advanced to the next round, and DeChambeau was second out of 16 in his group.

“I really couldn’t ask for much better of a day,” DeChambeau told GOLF.com. “I didn’t strike it as well; I wanted to get every one on the grid, but when you are trying to push speed it’s not easy to control those hand and wrist angles.

“I can’t believe I finished second,” he continued. “This is a dream come true for me in this scenario. Shoot, I was just thinking about trying to long drive a year and half ago, and now to be here on this big of a stage and doing what I’m doing, it’s crazy.”

On Wednesday, competitors hit six balls in five different sets and faced off against other members of their group. Points were earned based off how each player finished a set. Going against the wind, DeChambeau’s longest drive was 355 yards. That came a day after he hit three balls over 400 yards with a downwind. But he knows he’s got a lot of work to do to continue in the tournament.

“These guys are incredible,” he said. “Yeah, I finished second. I had a 30 mph wind in to me. When it’s downwind and they get a ball on the grid, it’s over. I don’t have a chance.”

For the third round, competitors are divided into two groups of 16, and the top eight in each advance to Friday’s championship round. The action begins at 6:45 p.m. ET on Thursday. It won’t be broadcast on TV, but you can stream it online. For more on how to watch, click here.

Check out highlights of DeChambeau’s Wednesday action below. His session begins at the 7:17:40 mark.