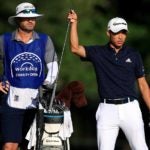 Collin Morikawa will be the man to beat on Saturday at the 2020 WorkDay Charity Open.

Two rounds are nearly complete at the 2020 WorkDay Charity Open. The second round was suspended due to darkness, so the few players remaining on the course will return to Muirfield Village Saturday morning to complete their rounds before Round 3 begins shortly thereafter. Here’s everything you need to know to watch the third round.

Everyone in the field left standing after Friday’s round will be chasing one man, 23-year-old Collin Morikawa. The young PGA Tour star already has a win on his resume, and now he’s built a nice lead at the WorkDay after opening with rounds of 65 and 66.

Former Masters champion Patrick Reed also had a strong showing through the first two days. Reed shot a two-under 70 on Friday to reach six under for the tournament, putting him seven shots behind Morikawa.

Justin Thomas, the betting favorite heading into the week, has also set himself up for a run at the lead on Saturday. Thomas shot a 66 in Round 2 to reach 10 under, putting him just two shots behind Morikawa.

Here’s all the information you need to follow along with the third round in Ohio.

How to watch WorkDay Charity Open Round 3 on TV

Golf Channel has the early action for Saturday’s third round of the 2020 WorkDay Charity Open. They will broadcast two hours of coverage from 1-3 p.m. ET. Then CBS takes over to broadcast the heart of Round 3 from 3-6 p.m. ET.

How to stream the WorkDay Charity Classic Round 3 online

For fans with an active cable TV subscription, watching the third round of the 2020 WorkDay Charity Open online will be easy. You can catch the full third round Golf Channel broadcast on golfchannel.com. The CBS broadcast can be streamed live at cbs.com/all-access by logging in with your cable credentials, or you can sign up for a CBS All-Access account right here. Fans can also view Featured Group coverage of Round 3 all day Saturday via PGA Tour Live, though you will need an account to access the stream.