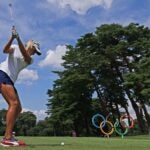 Lexi Thompson during an Olympics practice round at Kasumigaseki Country Club.

The Kordas. The South Koreans. And one of the greatest stretches of women’s golf of the year.

The women’s Olympic golf tournament begins Wednesday (Tuesday night in the Eastern time zone) at Kasumigaseki Country Club in Japan. Let’s look at the players, the storylines, the numbers to know, the odds, the television broadcast and more.

Unlike the men, most of the top women are playing in the Games (more on that later), making this event one of several over the next few weeks that will be must watch (more on that later, too). In all, 60 players will be teeing it up, and their selection was based on the Olympic Golf Ranking, which was based on the Rolex Women’s World Golf Rankings. The top 15 ranked players qualified (unless their country already had four), and, from there, the field was completed by ranking (though a country could have no more than two players qualify through this route, and if a country qualified two players from the top 15, they could have no more on their team).

1. Nelly Korda, U.S.: The 22-year-old broke through at the KPMG Women’s PGA Championship for her first major championship. She’ll join older sister Jessica on the team, and they’ll follow in the footsteps of their mother, Regina, who was a member of the Czechoslovakian women’s tennis team at the 1988 Games.

5. Danielle Kang, U.S.: Kang won the first two tournaments after the LPGA Tour’s hiatus last year, and she won the Vare Trophy in 2020 for the Tour’s lowest scoring average (70.08).

6. Hyo-Joo Kim, South Korea: Kim is now ranked fifth in the world — but No. 4 among South Koreans.

7. Brooke Henderson, Canada: Henderson won the Hugel-Air Premia LA Open in April, her first victory in nearly two years. She tied for seventh at the 2016 Games.

9. Lexi Thompson, U.S.: Thompson is the lone returning American from the 2016 Games. Also playing that year were Stacy Lewis and Gerina Piller.

10. Lydia Ko, New Zealand: Ko is the defending silver medalist. In April, at the Lotte Championship, she won for the first time in nearly three years.

While no team medal will be awarded, the individual medalists could very well come from two teams — the U.S. and South Korea. The South Koreans are an all-star team — among Jin Young Ko, Park, Sei Young Kim and Hyo-Joo Kim, they have four of the top five spots in the world rankings, but they don’t have the top spot. Heading Team USA is No. 1 Nelly Korda, along with No. 6 Kang, No. 11 Thompson and No. 13 Jessica Korda. Pity poor Min Ji Park of South Korea and American Ally Ewing — they are ranked 15th and 17th in the world, respectively, but did not qualify for their country’s teams.

The American and South Korean star power leads us to another storyline — unlike the men, most of the top women in the world will be playing in the Games. Only a few women, including England’s Charley Hull, are out. “I’m sure not everyone’s goal is the Olympics,” Inbee Park said before the PGA. “It really depends on the player, but I think most of the players think that it’s a very special opportunity, and I think I know a lot of Korean girls, I think it’s one of their most-wanted goals to be on the team. For me as well, I’ve achieved a lot in golf, won a lot of majors, won a lot of tournaments, but winning the gold medal was something really different. I think a lot of the players think the same and treat the Olympics the same. I think it’s definitely something that you should experience. It’s something different.”

Both the men’s and women’s tournaments will be played at the East Course at Kasumigaseki Country Club. Opened in 1929 under the design of Kinya Fujii and Shirou Akaboshi, it’s been redesigned twice, first by C.H. Alison in 1929, then by Tom and Logan Fazio in 2016.

A major change during the second redesign? The East Course’s two-green layout was turned into the more traditional one-green design, according to a 2017 Golf Course Architecture story written by Tom Fazio. Two greens are used on courses in Japan to accommodate play during various temperatures.

Among those who have won at Kasumigaseki? Hideki Matsuyama, 2010 at the Asian Amateur Championship — which afforded him his first Masters invite.

For a drone tour of the front Kasumigaseki nine, click below:

For a drone tour of the back Kasumigaseki nine, click below:

The numbers to know

The number of players in the field. There is no cut in the 72-hole event. Should players be tied after the 72 holes, they will play a three-hole playoff, and if it remains tied after that, they will go to sudden death.

The hour time difference between Tokyo and the Eastern time zone. The tournament runs Wednesday through Saturday — but the Golf Channel broadcasts will start at 6:30 p.m. ET the nights before.

Returning number of medalists. In 2016, Inbee Park won the gold medal, Lydia Ko the silver and Shanshan Feng bronze. Before that, women’s golf hadn’t been played in the Olympics since 1900.

Tokyo is 13 hours ahead of the Eastern time zone, and the Golf Channel’s broadcast schedule reflects that.