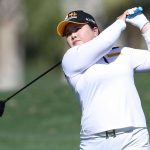 Inbee Park, already one of the greatest golfers in history, revealed at last month’s Bank of Hope LPGA Match Play at Shadow Creek that she had lost her grandfather a few days prior.

BJ Park, she said, died at 78. Inbee Park said he was instrumental in getting her into golf. It was his dream to play golf with Inbee and her father, three generations, and she first started when she was 10 years old.

“He was a really good golfer and he loved playing with me,” said Park, who, along with her family, was in Korea the week before to say goodbye to him. “I’m here because of him, so I think that’s why it just means so much more. … He really loved me and he really loved me playing golf. He always meant so much in my heart.”

At just 32, Park has already racked up 21 LPGA wins and seven major titles. The last tournament her grandfather watched was the HSBC Women’s Champions in 2017, which Park won. He went to the hospital shortly after and was there up until his death.

Park said her inspiration on the golf course is her family. So during that pre-tournament press conference at Shadow Creek, when Park was asked a question to help guide the girls in the PGA Junior League program, she knew exactly how to answer. “What advice did she have for them to be successful, not only in golf, but in whatever they decide to do in their lives?” she was asked.

Park’s inspiration has powered her to a Hall-of-Fame career.