Why do Japanese golf courses have two greens on every hole? 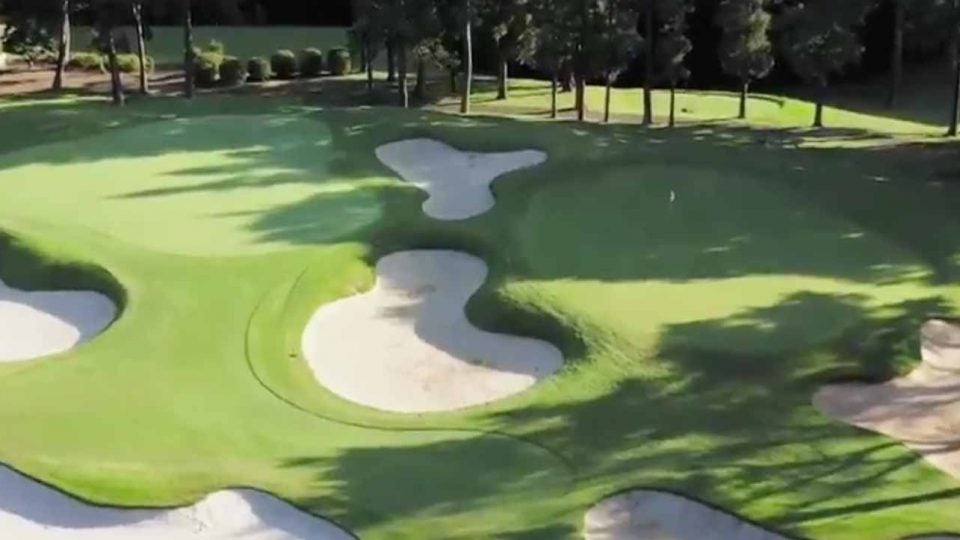 During Monday’s Japan Skins, the high-powered foursome of Tiger Woods, Rory McIlroy, Hideki Matsuyama and Jason Day were presented with a challenge at the fourth hole: Play to the left green or the right green — dealer’s choice. Woods took aim at the right green but misfired, hitting a pull that ended up directly between the right and left greens.

“That was such a bad shot,” he said, exasperated but trying to stay light-hearted on the broadcast. “I tried to hit a cut and pull-hooked it!”

Up near the green, he adjusted his plan, chipping instead to the left green, where he rolled in a putt for par.

It’s not rare for a course to feature a hole with an alternate green. No. 8 at Pine Valley, No. 13 at Streamsong Black and No. 4 at Cabot Cliffs are three high-profile examples. But many courses in Japan, including this week’s Zozo Championship host course, Accordia Golf Narashino Country Club, have two such greens on every single hole.

The two-green system originated from a desire to keep greens playable across different seasons. Because Japan has hot, humid summers and cold winters, they could use a different grass type on each green to allow for options based on the weather. Tyler Pringle of American Golf notes that summer greens would typically feature bermuda or zoysia, while the winter greens would favor bent grass.

Advancements in turf management mean that two greens with two different grass types has become less necessary at many courses. Still, many in Japan and some others in South Korea maintain two greens on every single hole. There are benefits to having double the greens, of course. Twice as many putting surfaces means half as much wear and tear. It means no need to reduce greens fees for aeration periods. It also frees up one green per hole for required renovation or maintenance, and it provides some variety for course regulars.

There are also drawbacks, of course — twice as many greens means twice as much maintenance, which means increased budgets and transfers indirectly to more expensive golf. Still, the dual green phenomenon is something different. This week, Zozo Championship competitors will see action on both the left and right greens at No. 4, though not at the same time like in the skins game. Collin Morikawa, for one, was amused by the dual greens.  “I don’t know a place that has two greens unless you’re playing soccer golf,” he said. You can see more examples of the double-greens below.

How to get tickets for the 2023 U.S. Open at Los Angeles Country Club