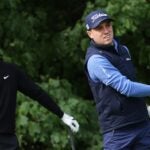 Tiger Woods and Justin Thomas are in the same group on Thursday and Friday at Winged Foot.

In order to get some on-the-ground insights into this week’s U.S. Open, we sat down with five Winged Foot club champions to break down a series of questions that only course insiders would really know how to answer. This is the third part of that roundtable. Part I on rooting interests is here and Part II on predicting the winning score is here.

Winged Foot’s club champions haven’t mastered their home golf course. They’ve just recognized the balance of power in the relationship between golfer and golf course better than anyone else at the club. Respect the course and you’ll receive a lesser punishment. We’re sure that this week’s U.S. Open competitors are poring the pages of GOLF.com looking for tips, and lucky for them! They would do well to follow the winning advice laid out below.

You can also hear their complete conversation in the podcast below, or in Apple Podcasts, Spotify or wherever you find your podcasts!

Eddie Bugniazet (1984, 1994, 1997 club champ): It’s pretty easy. Every hole, play to the outside of the dogleg. It’s really that simple. You play the outside of dogleg, you have an approach to every green.

Obviously not the par-3s, but if you can accomplish that, it gives you plenty of room off the tee. Even if you’re off the fairway, you have an angle to the front edge of every green and you can chip and putt there, at least have a putt for par.

Jeff Putman (2009 club champ): The two things you always have to think about, especially on a Tillinghast course and especially at Winged Foot: Always below the hole and never short-side yourself. There are places on that golf course where I don’t care how good your short game is, you can’t get up and down for par or whatever it is.

So those are my two cardinal rules: Never go over on any hole. And there are a few holes that are just — they’re death. So just stay short and never short-side yourself.

Robbie Williams (2013 club champ): Those are the two that I was going to go with! But I think looking back to the ’06 Open you watched a lot of guys miss a lot of putts in that six- to eight-foot range. And when the greens really get rolling, especially on Sunday, it’s going to be really fast and it’s going to be the guys that really know how to drip putts in and can feel comfortable making those kind of hesitant strokes and still making those putts.

So I’d like to see who can make the highest percentage of those six- to eight-footers.

Another thing, though, is taking your medicine, you know, and not trying to force it on the course. Like Eddie said, there are some run-ups on most holes. So if you do miss fairways, it’s just kind of getting it up there. And then the last point I’d add, which I think is huge, is being a good lag putter and being able to judge your lags and leave yourself good leaves.

George Boudria (2019, 2020 club champ): You know, I know guys like to throw around its a second shot golf course, but to me Winged Foot’s really a third- and fourth-shot golf course. I think if you really are a strong bunker player and really chip and putt well, like Rob said, in that five-, ten-foot range, I mean, that’s really the key on Open golf courses.

Dethier: That all makes sense. Let’s really zoom in, dial it in. What single shot do you think will go the furthest in determining the winner? It could be a tee shot, an approach shot, a chip shot. Where will the U.S. Open get decided?

Bugniazet: I’m going to say the tee shot on the par-4 15th. Two reasons. The new Gil Hanse improvement in the fairway opens up the left side. It used to be that you had to play that shot from the top of the hill, where the bunker is now.

But I think late in the round that tee shot will be crucial because if you flare it into the right bunker, it’s a really tough shot up to the green. And holding the green, period: The first 25 feet of the green can be basically unplayable, because that ball could come back off the front. Then you’re left with an impossible chip shot, depending on where the hole is.

Putman: Honestly, I’ve never thought about it. But now that I am, it’s an interesting question, and I think the answer is the tee shot on 16. You’ve got to be in the perfect part of the fairway there, because the tree that hugs the left side of the green will block you out. If you’re down the left side, even if you’re in the fairway, you’ve got to then probably hit a hook around it or a really high approach shot.

Williams: I’m probably echoing some of the theme here with a tee shot. I think the tee shot on the eighth hole might be the hardest shot at Winged Foot. If you think about it in the context of the round, you really start off with five holes where you really get punched in the mouth.

You might get a chance to get a little bit of momentum on 6 and 7, a short par-4 and an easier par-3, and then you get to the 8th hole. And that’s where you could really derail your round if you don’t hit a great shot.

To Eddie’s point earlier, you really want to stay on the outside part of the dogleg, but a 520-yard par-4 that typically plays into the wind, it’s going to be a bit of a challenge. You have a little bit of thought to try and hug the right side there, but if you end up right, then you’re making a bogey at best. If you don’t hit it in the fairway, then it’s really difficult to score. So I’d say I’m really looking forward to seeing how guys play that.

I’m going to sort of stick with that theme. I think the last four holes on Sunday are obviously going to be crucial.

Lamendola: I’m going to I’m going to go with the tee shot on 17 West [Ed. note: To us outsiders, “Winged Foot” means Winged Foot’s West Course, but the insiders get specific and directional almost every time]. There’s a new tee box back behind the green of 12 East. I think it plays 495. And I actually think the second shot on 17 is visually just a really tough approach. So I’m going to go with tee ball at 17 West, because you know you have to hit a mint one.

Boudria: Yeah, I’m with John [Lamendola] on that one. I think 17’s huge. I mean, it feels like it always plays into the wind and you’re back up on that hill and it’s easy to push one to the right or left. And it’s just, you know, you’ve got to hit the fairway because it’s a long hole and it’s a narrow green.

Putman: Just to add to that, I’d toss in the approach shot on 17. I made some notes about which bunkers you never want to be in and I included that left bunker on 17; you never want to be in there because of the knobs on the green. You always have a downhill lie landing downhill on the green and so you’ve got no chance to get it close unless the pin’s in kind of a funky place, maybe towards the back. So yeah, you need to have a perfect drive and a perfect second shot on that hole, because it’s maybe the most narrow approach on that golf course.