The best quote at the U.S. Amateur is a duck-hunter from small-town Texas 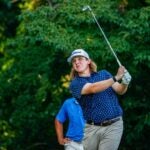 William Holcomb V is one of the best interviews in golf.

OAKMONT, Pa. — William Holcomb V fidgets like Keegan Bradley and talks like Kevin Kisner. And he might just have the most magnetic personality at Oakmont this week.

After he shellacked Brad Reeves 6 and 4 in the Round of 64 at the U.S. Amateur, I was eager to catch up with Holcomb — and he exceeded expectations. He’s the kind of guy that will talk for as long as you let him, and if he didn’t have a Round of 32 match to prep for, I would have let him talk all day. But here are four things that stuck with me from our chat, each delivered with an endearing Texas twang.

I asked Holcomb to describe himself, and he didn’t hesitate with his answer.

“My three favorite things in this world are Jesus, duck hunting and golf— in that order.”

“So you’re a hunter with a golfing problem?”

“I’m a Christian with a hunting problem.”

For someone who doesn’t consider golf his favorite hobby, he sure is good at it.

Holcomb hails from Crockett, Texas, a rural community between Houston and Dallas. The population is just under 7,000 people. It was on the nine-hole Spring Creek Country Club in his hometown that he took up the game.

“It’s got pushed-up greens and a bunch of old men. They keep you humble and will tell you how bad you are. When I made three straight bogeys to end my first round, one of them texted me and said, ‘Good thing there weren’t any more holes!’ It’s just those kinds of people. Small town, super fun.”

3. His hair is majestic

Holcomb’s hair flows out from beneath his fitted Titleist cap. The grow-out started as a pandemic look, but now he plans to chop it off and donate his locks. He hopes to hold out until next summer.

“When I cut it next June it’s gonna be so hot, it’s gonna feel so good. It’s like when you don’t eat for a while, don’t just go to McDonalds. You need to go eat something really good, because then it’s like even better.”

4. His best memory from this year

The Sam Houston State product had a viral moment earlier this year when he filmed himself in his hotel room cheering on his teammates in their regional tournament. Holcomb had to withdraw and quarantine because of Covid protocols, but he made the most of it anyways.

The memory still makes him smile.

“I couldn’t believe those jokers did it! I knew they could, but not having it in your hands is harder than hitting the shot.”