How weather eliminated nearly 80 players at the U.S. Amateur 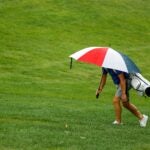 Storms have been a recurring theme at the 121st U.S. Amateur.

OAKMONT, Pa. — Mother Nature is leaving her mark on the 121st U.S. Amateur.

Thanks to a system of storms in the Pittsburgh area Tuesday afternoon, players were pulled off the course and endured a four-hour delay, forcing second-round play to be completed early Wednesday morning. When another large cell moved through the area shortly before 1 p.m., the scheduled 12-for-1 playoff for the final spot in the bracket was also put on hold.

But Mother Nature’s wrath has not just impacted the championship’s schedule. The weather also affected the makeup of the 64-player match-play bracket.

Temperatures rose to near 90 degrees for the afternoon wave as winds blew steadily, drying out the already brutish course. Oakmont’s scoring average for the day was 77.2 while the other stroke-play host venue, Longue Vue Club, played considerably easier at 71.7. Cole Sherwood was the lone player to break par at Oakmont during the first round.

Tuesday’s conditions were much more benign thanks largely to the storm cell that soaked the course during the afternoon. Oakmont’s scoring average for the second round was a more reasonable 74.9.

“It was different for sure,” said Mark Goetz, who claimed medalist honors following rounds of 64 and 68. “I hit a wedge into No. 1 that stuck and rolled three feet down. You couldn’t hold that green in the practice round.”

Don’t expect it to be the last time the weather impacts this week’s U.S. Amateur. Storms are forecast to be in the area throughout the week.

‘This has been coming’: Why Rickie Fowler is confident on cusp of comeback win