Triple-chips? Quadruple-bogeys?! Concession is delivering a thrill ride of golf 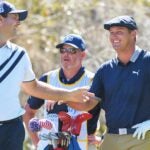 BRADENTON, Fla. — Concession Golf Club is tucked inside a gated golf course within a gated community within the larger “planned community” of Lakewood Ranch, the center of a Russian nesting doll of Floridian development. It’s hardly the place you’d expect to find disorder.

But that’s exactly where the PGA Tour has found what it needed this week: A little chaos. That’s great news for viewers — just be glad you’re not in the field to experience it firsthand.

Fans of the WGC-Mexico had grown to appreciate the unique demands of Tour pros taking on Golf Club de Chapultepec, which sits some 8,000 feet above sea level and facilitated 300-yard 4-irons and plenty of pros getting creative — and shaking their heads. Coming on the heels of classic gem Riviera Country Club, it made sense to visit a course that demanded something distinctly different.

But when the tournament became the WGC-Workday and shifted from Mexico City to west Florida, “different” didn’t come immediately to mind. Both the PGA and LPGA tours have a glut of stops in the Sunshine State; what would stand out about this one?

As it turns out, a whole bunch.

For starters, hardly anybody in the field had been to Concession before this week. Bryson DeChambeau won the NCAA title here in 2015. Cameron Smith holed up here with his buddies when dodging a storm. This week’s event is the equivalent of parachuting the best players in the world onto a very challenging, completely foreign golf course.

Why does that matter? Because typically, Tour pros enter an event with a boatload of institutional knowledge. Caddies get pin sheets from the year prior, so they know where hole locations will be. Players consult patterns from ShotLink, which leads to groupthink; everyone gradually begins to approach the course the same way. Not so this week.

It began at the first hole, where pros hit anything from driving iron short of the right bunkers to driver, sent over the top of everything. Check out the dispersion off the tee:

On Friday, the front hole location on No. 3 sat in a bowl surrounded by steep slopes long and right and precariously close to a ridge on the left. It typified the creativity required around the greens. I stopped to watch one group, who’d each ended up greenside in two shots.

Jason Scrivener, who’d left himself 25 yards short and right of the pin, played first. He aimed well right and hit a spinning chip that just about died some 20 feet above the hole but then trickled ever so carefully down the slope to three feet. Chan Kim played next, from low and left of the green, and sent a high, soft flop that landed short of the hole and rolled up to kick-in range. Laurie Canter went last. His angle was similar to Scrivener’s but he selected putter instead, kept the ball on the ground and played a preposterously wide break. His ball eventually settled four feet past the hole. Three distinctly different strategies. Three birdies.

Not everybody had the same luck. Two groups later, Daniel Berger took three chips just to get his ball on the green; he stormed off with double. Mid-afternoon, Erik van Rooyen found himself just left of the green in three — and then hit three consecutive chips that came back to his feet before getting up-and-down for triple-bogey 8. Each of his playing partners made 4. At Concession, birdies and round-ruiners reside in close proximity.

The drivable par-4 12th offered plenty of intrigue of its own. On Thursday, a back right pin was on the edge of a precipice, demanding caution on approach — and creativity from those who left themselves short-sided.

Players have spent so much time dissecting Riviera’s 10th hole that they all basically try to do the same thing: Leave themselves at the front left edge of the green. Players haven’t spent any time at all thinking about No. 12 at Concession, so nobody knew what the heck to do! There’s no clear layup zone and no obvious bailout with driver. It’s rare to see as many different clusters on one hole as No. 12 had in the first round:

And it was fascinating to see how moving the tees up 10 yards and shifting the pin to the middle left yielded a far more aggressive strategy from the players — and 30 birdies on Friday compared with just 12 on Thursday:

You get the idea: Concession is a rollercoaster ride. Day 1 saw 77s from pre-tournament favorites Dustin Johnson and Bryson DeChambeau, and an 83 from Matthew Wolff. DeChambeau followed that 77 with a 64. Wolff withdrew.

Concession yielded more low scores on Friday than Thursday, but it wasn’t without peril. Playing alongside DeChambeau — who birdied six of his last eight holes — Patrick Reed surged into the lead, then found the water at No. 5, then found the water again at No. 8. The third in their group, Viktor Hovland, was 7-under through 17 holes and then made such a mess of the 18th hole that visited two bunkers, two bushes and got up-and-down for a quadruple-bogey 8.

At the end of two days’ action, the men at the top are the ones who manage chaos best. There’s Webb Simpson, king of order, who’d spent Tuesday in an exhaustive strategy session with caddie Paul Tesori.

“We were a little slow in our practice rounds, there was more to talk
about, more conversation,” he said.

There was Billy Horschel, who had missed all of two fairways through two rounds. The rest of the leaderboard was filled with grinders like Cameron Smith, Kevin Kisner and Matthew Fitzpatrick — plus Tony Finau, who’s always on the leaderboard these days.

And they’re all looking up at Brooks Koepka, who opened 67-66 even though he’d never even seen the front nine before Thursday. How did he defy the chaos? He just ignored it altogether.

“I just try to keep it pretty simple. If it’s 300 yards to the bunker or there’s a bunker that cuts out, okay, then it’s just 3-wood,” he said after his opening round. “I try to make it very simple and I don’t overcomplicate it.”

Koepka may not see the chaos. “It’s just a typical south Florida golf course,” he said. He may not see the creativity, either, even when he’s the one being creative. That’s okay. He’s better at taking Concession head-on. We’re better at appreciating it from the sidelines.

Who will be the low man in the Woods-Spieth-McIlroy supergroup?

Jordan Spieth still isn't over his 'annoying' Masters, but the PGA is a good start

'I'm a realist': Pro offers most candid explanation yet regarding LIV Golf participation