Can Jordan Spieth win the Charles Schwab Challenge — even when he’s ‘off?’ 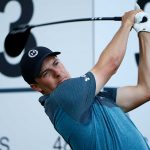 Jordan Spieth hits his tee shot on Saturday on the 3rd hole at Colonial Country Club.

Jordan Spieth, as he continues to rediscover his game, no doubt sees life one day something like how he played the 15th hole on Saturday at Colonial Country Club. Drive down the fairway. An approach to 11 feet. A one-putt. As easy as one, two and birdie three.

Drive into the right rough, with the green inaccessible because of water fronting it, and trees ahead of him.

A punch-out back into the fairway.

Third shot onto the green and 12 feet from the hole.

A putt into the middle of the cup.

And a knowing grin.

“Nine was big for me,” Spieth said. “I punched it out after being off-line and got up-and-down for par and it led to a bogey-free, few-under back nine. That was a big accomplishment. OK, let’s settle in, let’s make kind of the right decisions and then if it starts to feel better, then we can attack the pins.”

What has Spieth both in the lead after three rounds at the Charles Schwab Challenge, and within 18 holes of his second win in two months, after not winning at all since 2017? It’s not just the ability to make the easy birdies. It’s the skill to find the hard pars.

“Yeah, I really — the first couple rounds I gave myself a lot of chances and I got a little off today, for sure,” he said. “I’ve got to kind of maybe look at a couple and maybe talk to my coach, just kind of figure out how to tighten it up. I think it was just kind of one of those days where I made kind of one not-so-good swing and then I was just protecting against some stuff.

“It’s hard, if you get a little off out here, you get pretty exposed because you have to be so precise. Even though I was off, I was then kind of, change the game plan. Let’s get ourselves, if we’re going to miss the fairway, we’re going to miss it over here; we’re going to peel it off this side, and was able to make a few birdies on the back nine with what felt like very little when I was over the ball.”

After 9, after a bogey at 8, Spieth was one under for his round. On the back, he birdied the par-3 13th after hitting his tee shot to 9 feet. Then came the birdie on 15. On the par-4 18th, after a drive into the right rough, he hit his approach to 8 feet, then dropped the putt for a four-under 66, a 15-under total and a one-shot lead over Jason Kokrak.

It continues, too, a stretch since the start of February that has seen Spieth: shoot 20 rounds in the 60s; finish in the top 10 seven times over 11 tournaments; and win at the Valero Texas Open, his first victory since the 2017 Open Championship. A win Sunday would also be his second at Colonial, a short drive from where he grew up.

“Fortunately, I can control my own destiny tomorrow,” Spieth said. “That’s obviously what you want, when you start on Thursday, it’s teeing off Sunday with a chance to control what you can and a course that doesn’t really yield super-low scores, and I think that that’s nice. The first couple holes you want to get off to a good start, but after that, you know, you just kind of plug along.”