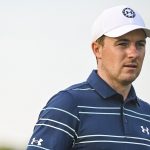 Jordan Spieth enters the PGA Championship as one of the tournament favorites.

I suppose there’s a freedom in that, as a writer who covers golfers. I could type just about anything in the paragraphs that follow and I can be sure that when I see Spieth at the course tomorrow, he’ll have no idea.

Not that there’s anything negative to say, anyway. There are players with skeletons in their closet, and Spieth is not one of them (as far as I know). He’s on a run of good form. He’s worked his way “back.” Even when he was struggling, he was pleasant to media, to fans, to volunteers — but he’s carrying an even lighter burden now, since winning in Texas in March. He’s among the favorites entering this week’s PGA Championship, where he’s also gunning for the career Grand Slam.

Now that Spieth has won again, reporters seem far more comfortable asking him questions about those three years, that TBW (Time Between Wins). It’s safer territory now that he’s perceived to be happily on the other side. Winning might not solve everything, but it sure buys you some time.

On Tuesday at Spieth’s press availability, one reporter asked him about his scrolling habits.

“I would assume you don’t read a lot of stories about yourself; is that correct?” he asked.

That’s noteworthy. It’s easy to say that if you were as famous as Spieth, you’d ignore what people said about you. But it’s much more difficult in practice. It’s natural to be curious what people think. We all are.

Spieth might not have his head completely in the sand, but he’s trying his best. He acknowledged that he gets a general sense of what’s being said about him based on interview questions, but he insists that whenever he does hear what’s said about his game and situation, the analysis doesn’t do the real thing justice.

“Unless anyone has been in a similar position, I don’t really take it to mean a whole lot,” he said. Until Rory McIlroy starts writing guest columns, that disqualifies all of us. Instead, he relies on a tight circle of trusted friends who are in it for the long haul. “Instead of being so high on the highs and so low on the lows, it’s just their steady voice that has been helpful for me,” he said.

The media, by contrast?

“It’s just so temporary. It’s like, What have you done the last couple weeks?” he said. “I have one good Saturday in Phoenix and they’re like, Oh, so you’re back. It’s like, I shot one good round. This is a thing I want to do for 20 years is play consistent golf, and in that, yeah, I’ve had some pretty high ups and some pretty low lows for my age, but it’s just part of the learning curve, I think. So I imagine it’s just been exaggerated on both ends, so there’s no use in getting caught up in it.”

It’s not just the media, though, that he blocks out.

“I think the weirdest part is just when you’re out and about at a golf course or even at like a restaurant and someone is like, ‘Hey, you know, hope you figure it out’ or something like that. I’m like, Okay. It’s golf.”

This is the part where I could slip in a hot take about Spieth. He’s too nice, perhaps. He should change his grip, I could say. He’s been wearing too much blue. After all, he won’t read it.

But in truth, when it comes to Spieth, it’s hard to take too much issue with his approach. He treats the media with respect. He just has no use for our output. That approach seems to be working out just fine for him, so far.

“You’ve just got to kind of brush and laugh it off and stick to your game plan and believe in yourself, bet on yourself,” Spieth said. “I’ve always done that, and I feel like that’s paid off pretty well to this point, and if any of the next eight years are like my last eight years, I’d certainly sign up for that.”