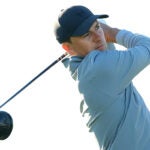 Jordan Spieth hits his tee shot on Friday on the 11th hole at TPC Scottsdale.

Jordan Spieth hit his tee shot on the par-5 3rd hole at TPC Scottsdale, held his follow-through for just a second, then cocked his driver forward, twirled it through his fingers and began marching forward, all before his ball dropped down the right side of the fairway. He hit his second shot, from 237 yards out, to within 32 feet. “Oh, that’s going to be really, really good,” an announcer on the PGA Tour Live broadcast said. He rolled in the eagle putt.

One good hole does not make a round. Two good rounds do not make a tournament. One good tournament would not turn around a career. But Spieth followed up a Thursday 67 with a Friday 67, and your eyes don’t have to lower too far to find his name on the leaderboard. On a Friday in early February, during the second round of the Waste Management Phoenix Open, Jordan Spieth, kind of, sort of, looked like Jordan Spieth again.

“Probably higher than it’s been in a long time,” Spieth said when asked his confidence level. “Still certainly not at 100, not feeling like I have my ‘A’ game, but I feel like it’s trending that direction, which gives me a lot of confidence.”

Thursday’s 67 was similar to Friday’s in number alone. On Thursday, Spieth played his back nine at four under, but even he admitted while walking to the 18th hole that he was playing “an absolute joke of a golf round.” He hit 2 of 14 fairways. On 17, he drove it behind a cactus left of the green on the short par-4, debated whether his hand would get pricked, then nearly pitched into the water before scrambling for a par.

But it was a 67, his second-best score of the season. And it was back-to-back 67s, the lowest he’s gone in consecutive rounds since he shot 65-65 to open the Charles Schwab Challenge last June, the first tournament after the PGA Tour’s three-month hiatus.

“It really was a fantastic day where I started to tap in a little bit into those feels,” Spieth said. “It felt like a six- or seven-under day, and this is one of the first times I’ve almost been disappointed shooting four under in a round in a long time, and that’s a good sign. Versus yesterday it was one of those, like, all right, I shot four, but I got away with murder.

“It was a tale of kind of two different days, and what I like about it was I just went to trusting more and more today off the bat, and I hit just great shots.”

From 2013 to 2017, Spieth won 11 times on the PGA Tour and twice internationally, including three majors. He spent 26 weeks as the world’s No. 1 player. Spieth’s now 92nd. He hasn’t won since the 2017 Open Championship. He’s tried to figure out why. And not just him. Everyone with a club and clue.

“I’m as hard on myself as anybody is on me, and I’m as confident in myself as anybody is in me at different stages,” Spieth said. “It’s really just — I love the game. I want to play with freedom. I want to win golf tournaments, and I want to get myself back. I’ve put in the hours. It’s just a matter of kind of working really smart, working on the right things, and then again, trusting it and just being OK with that patience of not having to see results right away. It’s a new thing for me.

“I went through 10 years-plus of every single year I actually got better at golf and had better results, too, and then at some point, that can’t continue to happen and then go through adversity, and for me, that’s taken longer to overcome than I certainly want it to, but I feel confident in my road ahead for sure.”

Before walking away, he was asked how much he “needed” a good Saturday. Before the question was even finished, Spieth answered.

“I don’t,” he said. “I mean, again, it’s just about trusting what I’m doing here. If I shoot six under tomorrow, awesome. If I shoot even, but I trusted it and it felt really good and I just didn’t get the right breaks or lipped out or something, really, that’s fine.

“I know that once I am hitting the positions I want to hit in the swing, I’ve got the tempo I want, I’ve got the right swing feels, I know that I’ll end up progressing forward, shooting a lot of low rounds and winning golf tournaments because I’ve done it.”