Butch Harmon on Jordan Spieth: ‘All I did was give him my opinion’ 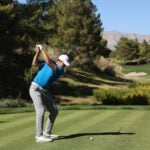 Jordan Spieth, as he attempts to recover the form that earned him three majors and the world’s No. 1 ranking, this week said: “When you hit however many tens of thousands of golf balls kind of the wrong way, it takes about that many to get stuff back.”

“It’ll be a work in progress,” he said on the Gravy & the Sleeze show on SiriusXM PGA Tour Radio.

A few of those thousands were in front of Butch Harmon.

On the A New Breed of Golf show, also on SiriusXM PGA Tour Radio, the legendary instructor said this week that Spieth called him in October while playing the CJ Cup in Las Vegas, Harmon’s home. Spieth, Harmon said, asked if he could look at what he and his coach, Cam McCormick were working on.

“I thought I was going to have to change his club face at the top of his swing because you know how open that gets because he has a very weak left-hand grip,” Harmon told host Michael Breed. “But they had worked beautifully on that — the clubface was good.”

Harmon, during his session with Spieth, said he “didn’t think that he was turning enough.”

“I thought the club would get in a little too deep, and he would lift, and he wasn’t getting any rotation in his body, which didn’t allow him to unwind into it,” Harmon said. “As you know, if you don’t wind something up, you can’t unwind it. And so he was kind of hanging and getting a little inside, so we worked a lot on the takeaway, worked a lot on getting a turn and then after I got a little width in his backswing. I wanted a little more width through the through swing.”

In response to various reports, Harmon denied that he was “working” with Spieth. Earlier in the week, on his Instagram account, Harmon also refuted that, writing, “This is not true and I have no idea who said this.”

“In Jordan’s case, he’s such a nice young man; I’ve known Jordan forever; I respect Cam tremendously,” Harmon said. “I was very upset the other day when it was reported by someone that I was working with Jordan because that isn’t true. That’s not fair to Cam, that’s not fair to Jordan, it’s not fair to me. All I did was give him my opinion, which a lot of guys come for.”