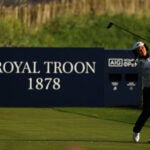 The par-3 5th hole at Royal Troon was playing 188 yards to the middle of the green during last month’s Women’s Open. The pin was 20 yards deep and 13 from the right. Christina Kim measured her shot as she walked to the tee box. She measured from her greens book. She measured the wind.

“I’m marking. I’m looking to see where that hole location is,” she said recently on the Sky Sports Podcast. “Boom, you can see the hole location there – you got the arrows showing you what the slopes are doing on the green so you have an idea what the green is going to do. You think about where the wind is coming from – it was coming into us off the right a little bit.

“You’ve got bunkers that are primarily down on the left side, so, in theory, you want to cut away from that, which means you’re going to start at the middle of the green and try to play a cut into the wind as opposed to trying to hit something out to the right over by the ocean and bring it back in.”

She did not play hurried.

But she did hurry-up.

“And then you just get your number, you get an idea of what kind of shot you want to hit and you hit it,” Kim said on the podcast.

“My caddie, Chris Murphy – he’s one of the best caddies out there, and I’m so lucky that I’ve been able to get the opportunity to get to work with him these last two weeks – I don’t talk to him about this s–t.”

The week before the Women’s Open, during the Ladies Scottish Open, Stacy Lewis called out her third- and fourth-round playing partners for slow play. Her fourth-round grouping finished in 5 hours and 16 minutes as Lewis would win. Of course, the issue is neither just the women, nor just recent. (See: Koepka, Brooks.)

“It’s not hard. The game is really not that hard,” Kim said on the podcast. “Brooks is very, very correct in that it’s not rocket science. And, at most, realistically, it’s one of two clubs.

“So when you have people that wait to get to their ball and then they just sit there and stare at – I don’t know what they’re looking at. You should have an idea. As soon as you make contact with your tee shot, you’re going to have one of three clubs nine times out of 10 because you should know how far your ball goes. You could look at the tee marker or the hole sign and be like, ‘Oh, OK, it’s 418, we’ve got a little bit of wind helping us from about 5 o’clock so the tee shot’s probably going to run out about 260, 270, which means that I’m going to have about 140 to 160 in, let’s say. So somewhere between a 9- and a 7-iron.’”

Kim said strokes are the solution. The PGA and the LPGA Tours penalize players both that way and with fines.