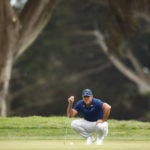 Brooks Koepka lines up a putt on the 3rd hole at TPC Harding Park on Saturday.

Brooks Koepka will be playing with Paul Casey during Sunday’s final round of the PGA Championship. He’ll be close to him for four, five hours across TPC Harding Park in San Francisco.

Koepka won’t be close with Casey afterward. Or with any of the other 154 players in the field.

Koepka is trying to win. He was two shots back of leader Dustin Johnson entering Sunday’s final round. He’s not trying to make friends. No offense.

“You got to separate it,” the two-time defending PGA champion said on the Marty Smith’s America podcast, which was recorded in February and released last week. “I don’t play a lot of practice rounds with guys. As simple as I just don’t want to give them a lot of information. They know, hey, if I push one to the right, I can carry that bunker, they know how far they hit it, they know how far I hit it, each club and all these different things so they can get a little bit of gauge on how to play it or if I feel like I got an advantage on somebody else because I saw this and I don’t think most guys would see it, I’m not about to share it.”

“Obviously there’s a lot of guys down in Jupiter – there’s probably 20, 30 guys, but at the same time, I’ve got my friends, I’ve got my friends that I grew up with, guys that are around,” Koepka said on the podcast. “I don’t need to see them every week out on Tour and every week at home, too. I enjoy getting away from the game. A lot of my boys, they could care less about golf, and that’s kind of been my outlet, getting away from golf sometimes. And I think that’s what’s been able to make me me.”

Koepka and Johnson had been close.

They had worked out together. They had shared a trainer. They’ve shared a swing coach. Koepka recently told Golfweek that “that got blown out of proportion because we worked out in the same gym. We no longer do that. All of last year at least we weren’t working out together.”

After Saturday’s third round at the PGA, Koepka even jabbed Johnson.