Who are the top 4 highest-paid athletes ever? Hint: 3 of them are golfers. 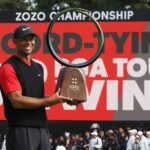 Tiger Woods, after his victory at the Zozo Championship in 2019.

The second, third and fourth highest-paid athletes of all-time are golfers. The man at the top of the list? He owns his own golf course, attends every Ryder Cup and so loves the game that he even played before regular-season, playoff and Dream Team Olympic basketball games.

In other words, you might want to bookmark GOLF.com instruction stories.

In a story published by sports business website Sportico on Thursday, Tiger Woods, Arnold Palmer and Jack Nicklaus ranked behind only Michael Jordan on a list of the biggest money earners in sports history. The inflation-adjusted ranking, Sportico said, included salaries, prize money, purses, bonuses, endorsements, licensing, royalties, memorabilia, book deals, appearances and golf course design, and the cut-off for earnings was June 1 of this year.

At No. 1 on the list was NBA legend Jordan, with $2.6 billion in career earnings. Woods was the only other athlete to crack two billion dollars, with 2.1. Palmer was at $1.5 billion, and Nicklaus at $1.38 billion.

According to an analyst interviewed by Sportico, a secret to golfers’ success lies in their longevity. Consider Nicklaus and Jordan. The Golden Bear turned pro in 1961 and was still cashing on the PGA Tour in 2005; MJ was drafted by the Chicago Bulls in 1984 and retired in 2003.

“With competitive careers that can span 30 years or more, golfers have the longest shelf life of any pro athletes,” Bob Dorfman, a sports marketing expert at Pinnacle Advertising, told Sportico. “Combine that with their global appeal across a broad and high-end fan demographic, and it’s no wonder so many rank high among the all-time earners in sports.”

Two other golfers made Sportico’s top 25 list. At No. 11 was Phil Mickelson, with $1.08 billion in inflation-adjusted earnings, while Greg Norman was at No. 15, with $815 million.