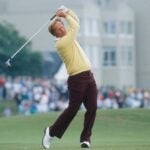 While the Golden Bear might not have more Claret Jugs than all of his contemporaries, he's still among the best links golfers of all time.

When the topic of links golf comes up, there are a number of names that are inextricably connected to the most classic form of the game. From the likes of Harry Vardon and Tom Morris Jr. to Peter Thompson and Tom Watson, there are certain greats whose artistry on the course allowed them to shine on links courses.

Another name that always comes up is Jack Nicklaus. While the Golden Bear might not have as many Claret Jugs on his resume as some other famed links masters, his record at The Open is stunning nonetheless.

Among those finishes, he registered seven runners-up. Another three times, Nicklaus finished third. If a few more putts fell, or a couple more bounces went his way, it’s not hard to imagine a world where Nicklaus matched — or even exceeded — Vardon’s record of six Claret Jugs.

But what was the secret to Nicklaus’ outstanding consistency and success in The Open? Adaptability and a willingness to adjust his approach to the demands of the course.

“It was just a real treat to go and play a championship in conditions that you’re not familiar with,” Nicklaus once said in an interview with the R&A. “You had to adapt your game and learn how to play.”

When Nicklaus made his Open Championship debut in 1962, he mustered a mere T34 finish. So he set out to alter his game in order to win in unfamiliar territory. The changes paid off, and in 1966, he won the first of his three Claret Jugs.

That week at Muirfield, Nicklaus knew he could not overpower the course like he could at so many other venues. He instead holstered the driver to avoid the penal rough and played for positioning into the undulating greens.

“I had to make up my mind how to play the golf course and I felt like a driver was not the club for that golf course,” he said. “I always felt like I would much rather play a golf course where I had to think my way around, pick the right golf club off every tee, play position, either work the ball left to right or right to left into a hole.”

With a template for success on links courses established, Nicklaus didn’t finish outside the top 10 at The Open for the next decade. It all started with his adaptability.

Check out our selection of Nicklaus gear