How this small gesture from Phil Mickelson made a lasting impact

Phil Mickelson's exchange with Kyler Aubrey at the PGA Championship earlier this year.

Remember when Phil Mickelson holed that bunker shot on the 5th hole in the final round of the PGA Championship, at Kiawah, in May? He was being chased by Brooks Koepka, his playing partner, and he was shaky early but owned the joint after that. So Phil.

Remember his next bit of theater, giving his ball to a young man in a wheelchair on his way to 6? There was a moment where his fingers were entwined with the fan’s. So Phil.

That ball is now sitting on a dresser in Statesboro, Ga. Everybody who comes to visit Kyler Aubrey, the ball’s owner, wants to see it.

Koepka said hi to Kyler that day, too. In September, on the Wednesday of the Tour Championship at East Lake, in Atlanta, Koepka invited Kyler on to the practice range. He asked Kyler what kind of music he likes.

“Drake,” Kyler said, tapping on his iPad. He has cerebral palsy, among other profound challenges. He’s not verbal.

Kyler typed out the names of his favorite Drake songs.

The next day, it so happened, Koepka wore a shirt designed by Drake, black and tight, with short sleeves and a mock neck. On 15, a par-3, Koepka hit his tee shot in the lake. Kyler was behind the green, in pain. But Koepka managed to make bogey, walked over to Kyler and said, “You having fun? Anybody come over and say hi?”

Kyler wrote on his iPad, “Dustin. Rory.” He touched a button so his written words would become speech. Koepka leaned in so he could hear the response.

Kyler got into Drake, and other musicians, not through an older sibling, as many people do, but through his kid brother, Jordan. Jordan could tell you all about “Statesboro Blues,” both the Allman Brothers version of it and the Blind Willie McTell original. Jordan played football and soccer. He died after falling from a moving vehicle in the summer before his senior year at Statesboro High. That was in 2015. He was 17.

Kyler has a sister, Sloan, who played on the boys’ golf team in high school, worked summers at the Forest Heights Country Club, in Statesboro, and is now a sophomore at Mercer University, in Macon. It was one of Sloan’s golf friends, familiar with the Ocean Course, who suggested the 5th green as a good place for Kyler to watch the action.

Kyler’s parents — Josh, a sportswriter for the Statesboro Herald, and Penny, a special education teacher — have logged many miles, pushing Kyler’s wheelchair across various PGA Tour courses. But Kiawah and its sandy paths presented different challenges. “Drunk people are very helpful,” the father will tell you. “But they may not push you in the right direction.” Cold beer followed the warm sun at the PGA this year.

“Thanks for bringing me some luck,” Mickelson told Kyler. 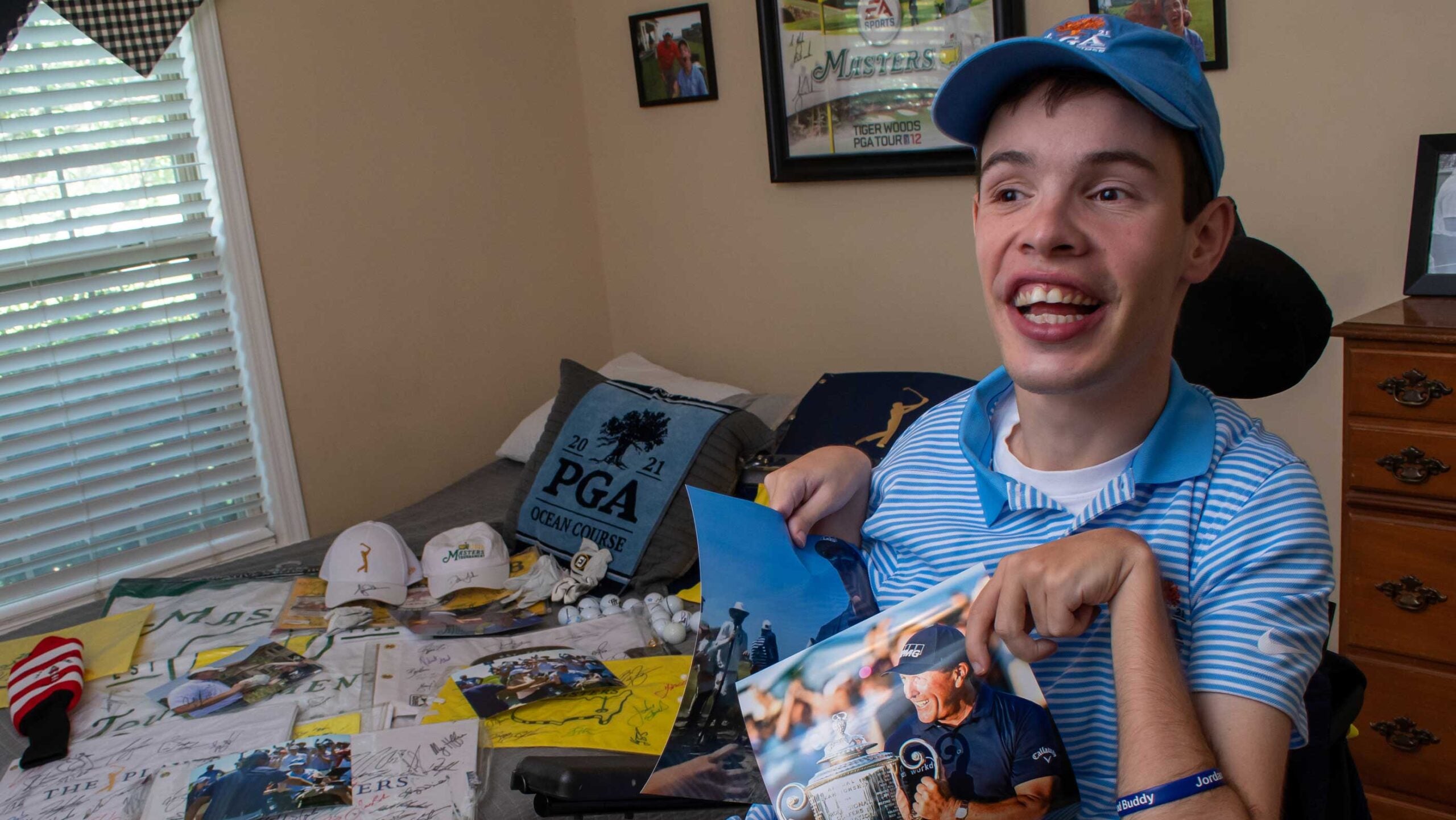 Kyler is 29. Starting when Kyler was 2, his father would strap him into his golf cart and they’d go around the course at Georgia Southern University. Kyler’s first tournament was at Hilton Head in 1999, the only year Tiger played the event. Kyler got Tiger’s signature and was off to the races.

Kyler has his own version of a golf clap, tapping his right fist into his open left hand. When he’s excited, his body stiffens. Many touring pros have taken notice of Kyler over the years. Rory McIlroy arranged for tickets for the PGA for Kyler and his father.

When Justin Rose won the Payne Stewart Award this year, he spoke about the enduring value of small gestures. He remembered Payne tossing him a ball at Royal St. George’s in 1993. Arnold Palmer was the king of the small gesture — flirty winks, bespoke autographs, handshakes with a shelf-life of forever. You’ll still hear people say, “Arnold was my hero.” Phil’s got some Arnold in him. With all that he had going on just then, Phil saw a kid in a wheelchair — Kyler looks like a kid — and gave him his game ball, fresh off a birdie. “Thanks for bringing me some luck,” he told Kyler. Kyler was screaming — a guttural grunt — through his joy.

But the real heroes here, of course, are the Aubreys, carrying on, despite their daily hardships and the struggle that must shroud them, even on the best of days.

That Sunday at Kiawah was right up there. Kyler was wiped out by the time he got home. Still, he got out his iPad and tapped out a message. Every word for him is work.

'Change is coming': Max Homa has big plans for the future of golf TV