What did Joel Dahmen learn this week? A lot about himself (and that he’s already in the ’23 U.S. Open) 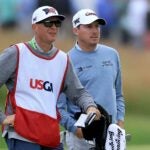 Joel Dahmen and Geno Bonnalie talk over a shot during the third round of the U.S. Open.

Joel Dahmen opened his week of U.S. Open press conferences with a joke.

“I made a great bogey,” he said on Thursday after a three-under 67, referencing the brutal 500-yard par-4 10th, the hardest hole on the course and the one he started his tournament on. “That’s a par-5, so it was fine.”

Dahmen’s strong play continued and so did the quips, but he also added a touch of sincerity. That’s what came mostly on Sunday night, when the 34-year-old pro spoke to reporters after his one-over 71 and T10 finish at The Country Club, tied for his best finish in nine majors. The $407,220 is also one of his best payouts ever, too.

It was a week of evolution for Dahmen, or so it seemed to those observing from outside the ropes. Often self-deprecating (a la Max Homa), he doesn’t look or act like most Tour pros, and he certainly doesn’t act like them when he’s leading golf tournaments. On Friday night, while holding the 36-hole co-lead, he called in to the No Laying Podcast from the course parking lot. He also did separate video interviews — after his press conference scrums — with GOLF.com after every round this week.

“I can hit it with the best of them,” he said on Sunday night. “I learned that, especially on a course like this where you have to hit it in the fairway and it’s not overly long. I think I was one of the best ball-strikers over the four days. I always knew I needed to kind of clean up the wedges and the putter if I really wanted to do this, and putter just wasn’t quite there. It wasn’t bad. It just wasn’t good enough to win, especially with the wedges. I kind of impressed myself, I guess, in this situation. I hung in there.”

Dahmen started Sunday three shots off the lead, and a bogey on 3 was followed by birdies on 5 and 7. He wasn’t completely out of it on the back nine, but he made two bogeys and seven pars coming in.

It’s the first time he’s made the cut in three U.S. Open appearances.

“I said this multiple times, where I’m pretty good at golf. I always believed that, but I probably need to believe a little more,” he said. “You know, being in these moments, especially over the weekend, and I handled myself really well. I felt comfortable out there. I really did. I played well. So, you know, just a couple of things here or there.”

Remember, this was a guy who almost skipped out on qualifying. But guess what? He doesn’t have to next year. He was reminded on Sunday that the top 10 and ties are automatically in next year’s Open. So Dahmen’s already set for Los Angeles Country Club.

“I had no idea on any of that stuff,” Dahmen said. “… If I’m still exempt, that’s incredible. I will not take a USGA championship for granted anymore. I will continue to try to qualify, that’s for sure.”

Except for next year. He’s skipping it.