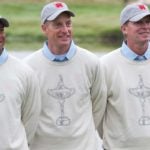 DUBLIN, Ohio — And so this American summer continues on, in all of its oddness, with pockets of familiarity. Friday was warm and sunny and relatively still and the early finishers in the annual tournament here, named for the holiday that marks the start of a season, could not pray for wind, so they hoped instead for the greens to bake, to get crispy and brown, for putts to slide by, for scores to creep up, for their positions to improve. The grinders’ mantra.

This field at Muirfield Village is filled with grinders, at the top of the leaderboard, in the middle of the field, bringing up the rear. There’s Steve Stricker, 53, going 73-67, cooling his jets on Friday afternoon, knowing he’ll have a late tee time on Saturday. Oh, the joy.

And Jim Furyk, 50, the same. The same two-day score. (His on 72-68.) The same mindset. It’s no wonder that Tiger Woods has been drawn to them both for almost 25 years now. They’re playing golf this weekend not because they are mega-talents, but because they are plus-four grinders. They are both first-ballot members of the Grinder Hall of Fame.

As is Woods, the 44-year-old golfing icon who did not have it on Friday. Poor putting, crooked shots, but a birdie-birdie-par finish to turn a possible 80 into a 76. He shot a first-round 71. His workday was done a little after 1 p.m. He was three over par. Two over was going to make the cut for sure. Three over meant he was playing a waiting game.

“This golf course is getting quick, and it’s getting difficult,” Woods said about a half-hour after his round was over. He was actually talking about Furyk and Stricker, two former Memorial winners, when he made said that. Woods was making a factual observation. But he was also describing his best chance. He needed an afternoon of high scores to have a chance to play on the weekend. A course getting faster and more difficult was his only hope. He had done all he could do. He made a six-footer on the last to give himself a chance.

He then went into the halfway house here at the Muirfield Village course, where he has won five times. He had finished on the 9th hole, as half the field did, and walked the bridge into the little screened-in brown hut, on cement stilts, over a brown pond crowded with the least appetizing brown carp you’ve ever seen. You can sign your scorecard in there. (Woods did.) You can get food and drink in there. (Woods did.) You can cool out in there. Woods did that, too. He looked at the scores, figured where he was on the cutline. You wouldn’t call this familiar territory for him, but he’s been there many times before. The waiting is the hardest part.

Woods didn’t come all this way (about 900 miles) and wait all this time (about five months) to finally play in a tournament and not make the cut. He spent about 20 minutes in the repurposed halfway house. Brooks Koepka, one of his playing partners, spent about three.

When he was ready to face the world, Woods left the creature comforts of the halfway house, plopped himself down in the second row of a three-row golf cart and went up a hill, toward the clubhouse, where a small group of reporters was waiting on him.

Woods was asked how he would define the golf term grinder.

“I think that anyone who fights all day,” Woods said. “Guys that don’t ever want to make bogeys.”

He checks both boxes. So does Furyk. So does Stricker. The key word is fight.

Woods has the Tour record, 142 for consecutive cuts made.

Does he consider himself a grinder?

At that moment, he was outside the cut line, but it was a hot, sunny afternoon and the course was baking.