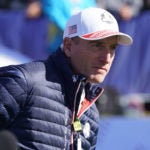 Jim Furyk is no stranger to the Ryder Cup; the PGA Tour veteran has played in nine and was the team captain in 2018. But now, as a U.S. vice-captain for the 2020 event at Whistling Straits in Wisconsin, Furyk recognizes this Cup is significantly different from the rest.

Many players, Rory McIlroy and Brooks Koepka included, have voiced their displeasure of playing a fan-less Ryder Cup due to the Covid-19 pandemic come September. During his pre-tournament press conference on Wednesday at the RBC Heritage, Furyk was asked if it was worth playing without the usual boisterous crowds.

“It’s strange to play a PGA Tour event without fans,” Furyk said, referencing last week’s Charles Schwab Challenge, where he finished T49. “It would be really strange…at a Ryder Cup. That atmosphere, the one side getting cheered for, the other side not at all, that’s kind of what makes that event. That’s what we love as players about that event.”

Furyk largely erred on the side of caution and patience, implying he’d need to know more about the specific details of the event before making a definitive claim.

“Are the options no fans at all? Are the options a limited number of fans, like we’re going to see, I think, on the PGA Tour to start?” he said. “What’s the financial ramifications to the PGA of America if we’re able to play under any of those conditions or if we’re not able to play at all?”

Regardless of potential situations the Ryder Cup may be played under, Furyk was sure to reinforce the tournament’s importance, and not just to fans.

“We all have to realize, the PGA of America represents 28,000 golf professionals around the country, and that event is their pride and joy,” he said. “That is the event that basically financially allows the golf professionals in our country to do a lot of great work and to grow the game.”

Furyk begins his first round at Harbour Town at 8:02 a.m. ET on Thursday alongside Collin Morikawa and Tony Finau.