What does the Genesis Invitational leader think of the Saudi League? Well … 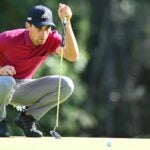 Joaquin Niemann lines up a putt on Saturday during the third round of the Genesis Invitational.

At this week’s Genesis Invitational, two events are running near simultaneously. The tournament itself — which Joaquin Niemann leads by three shots after a 68 during Saturday’s third round — and potential tournaments, or whatever may come of a proposed breakaway league funded by Saudi money. And player after player at the former have been asked about potentially playing in the latter.

Said Max Homa, the defending champion at the Genesis: “My allegiance to the PGA Tour? (Laughs.) Yeah, I don’t know, the stuff’s crazy. I, for one, have not signed an NDA, nor have I talked to anybody who would offer me an NDA. I don’t know anything. It’s been fun reading all of your guys’ articles and piecing them all together. I heard one yesterday that someone said 17 people signed, and somebody else said they haven’t heard anybody, so I guess that’s kind of telling of what’s going on.

“We think about it a lot, talk about it a lot. It’s an interesting dynamic we’ve got going. I love the PGA Tour. Driving up to this golf course with memories of winning a golf tournament that Tiger Woods handed me a trophy, they don’t have that in a breakaway league.”

Has Scott had any conversations with the league?

“Yes, yeah, but like everyone else, we’re sworn to secrecy.”

He gave a 19-word answer. And none of those words was yes. Or no.

On Saturday, it was brought up again, with a reporter asking: “Have you been in talks at all with the Saudi league?” His answer:

“Yeah, I mean, obviously a lot going on,” Niemann said. “I don’t want to — I don’t know much about it and I don’t want to say anything about it. I just wait.”

To note, earlier this month, Niemann played in the Asian Tour’s Saudi International, which is backed by the same group behind the proposed league, and he needed a waiver from the PGA Tour to do so.

Is Niemann’s answer this week much ado about nothing? Maybe. Would it look awkward if Niemann goes on to win one of the PGA Tour’s premier events, on one of its premier courses, and is potentially considering leaving should the breakaway league get off the ground? Maybe, too. Is it also his business, and his alone? Definitely.

One thing, however, is well known. Should he need counsel, Niemann has no shortage of players to seek out. Except for maybe McIlroy.

“Is there any part of you that is, A, tired of talking about it and …” a reporter asked him on Wednesday.