Justin Thomas: Focus on this 1 thing to improve your chipping 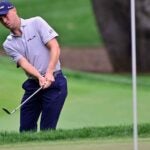 If you want to get up and down more when you miss greens, try this tip from 14-time PGA Tour winner Justin Thomas.

PACIFIC PALISADES, Calif. — Professional golfers do everything better than their amateur counterparts, but watching their work around the greens is perhaps the most impressive showcase of their skills. It doesn’t look like they approach these shots much differently than you and I, but after they make contact, the ball behaves quite differently.

Sometimes the ball will take one hop and then stop. Other times, it will skid across the turf and then catch at just the right moment, settling within feet of the hole. It’s like the ball is on a string, and one invisible tug determines where it will end up.

This type of artistry takes thousands of hours to master, and there’s no one-size-fits-all tip for how to improve.

“[It’s] just messing around,” Justin Thomas told GOLF.com at the Genesis Invitational. “Different hand positions, feels, what works for you, what doesn’t. That’s how I’ve generated [spin] or figured it out is just screwing around with it.”

Being able to generate spin around the greens is a huge benefit to your short game (plus it looks cool) and can help get you out of some tricky spots. Learn how to control it and those bogeys and doubles can quickly turn into pars.

The differences between pros and amateurs are stark, but much of the gap is due to how well they strike the ball. Spin will certainly help your game, but if you don’t have consistent, crisp contact, you’ll never be able to utilize it. Focus on contact, and the spin will follow.