Riviera is being torched by an unconventional swing. Here’s why it works 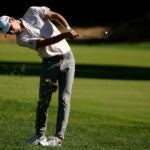 Joaquin Niemann has one of the quirkiest swings on the PGA Tour.

PACIFIC PALISADES, Calif. — Joaquin Niemann has one of the quirkiest swings on the PGA Tour. His move away from the ball is typical of what you’d expect from your average pro, and the beginning of his downswing is nothing out of the ordinary either. Once he gets about halfway down though, things get a little funky.

But don’t mistake an odd-looking swing for a bad swing. Niemann, 23, has already won on Tour and has talent in his arsenal that rivals any of the other young stars in pro golf. His performance at this week’s Genesis Invitational illustrates as much. Through 36 holes, the Chilean has set the tournament scoring record at the halfway mark at 16 under — and he’s showing no signs of slowing down.

“I think everything [is working],” Niemann said. “I hit the ball great off the tee. My iron play, I was hitting it really close so that makes it a lot easier … I think the whole game [is] pretty good.”

Pretty good is a bit of an understatement. What he’s done to Riviera Country Club through two rounds has quite literally never been done before. One 63 on this course is cause for celebration, but two in a row? That’s not something that ever happens at Riv.

What elements of Niemann’s swing have allowed him to be so successful this week? And what elements could cause him some issues? To explain that, we enlisted the help of GOLF Top 100 Teacher Jonathan Yarwood.

Let’s start with what Yarwood likes about Niemann’s swing. First and foremost, the takeaway, position at the top, and his position halfway down in the swing are all excellent. Niemann does a great job of getting into conventional positions in all of these checkpoints, which put him in a great spot to be a consistent ball striker.

Particularly impressive though is his forward bend in the downswing. During this move, he pushes down with his body weight into the ground, and relies on ground reaction forces to power his swing.

“He’s pushing down with his spine, which is creating forward bend during the downswing,” Yarwood said. “He gets his rib cage and his gut and his head — which are the heaviest part of his body — and he gets those pushing down into the ground. And obviously the ground is pushing back with an equal and opposite force, which generates a tremendous amount of power.”

At impact, Niemann looks as though he’s almost jumping (think Justin Thomas), which is a result of the ground reaction forces at work.

Let’s start with a disclaimer here: no one is saying Niemann’s swing is actually bad. He’s a Tour winner who is ranked No. 32 in the world — he obviously has a fantastic swing. However, there are some elements that Yarwood pointed out which can cause him some trouble.

The biggest thing that can present issues is the enormous side bend Niemann has during his downswing.

“Halfway down it’s pretty conventional,” Yarwood said. “But then he creates an enormous amount of side bend.”

For those unfamiliar with side bend, it’s the tilting of the spine away from the target during the downswing. This move is the reason Niemann’s impact position can look so odd compared to other players with more conventional swings. It’s a move he’s done since he was a junior golfer, and one that can create some issues when his timing is not on.

“He doesn’t create as much rotation with his shoulders and his chest as he could,” Yarwood said. “So the path sometimes goes out to the right, which can allow the ball to leak out to the right as a result.”

When Niemann times it properly (like he is this week at Riv), he can correct the path and hit the ball quite consistently. But when that timing isn’t sharp, things can go sideways.

Niemann’s swing has a lot to love, and some things that the average golfer would be wise to avoid. His forward bend and subsequent use of ground reaction forces are things recreational players can learn a lot from. But his side bend during the downswing you’d best avoid. It’s a swing that works for Niemann, but is not necessarily a template to copy.

“It’s quite an idiosyncratic swing,” Yarwood said. “It’s one of those swings where when it’s on it’s going to be fantastic, but when it’s off it’s not.”

This week, it’s on. And if continues to be on for two more days, Niemann could be be adding another trophy to the collection come Sunday night.