WGC-FedEx St. Jude Invitational live coverage: How to watch Round 1 on Thursday 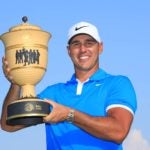 Brooks Koepka returns to the site of his 2019 victory at TPC Southwind.

The 2020 WGC-FedEx St. Jude Invitational begins Thursday at TPC Southwind in Memphis, Tenn. Here’s everything you need to know to watch Round 1.

Defending champion Brooks Koepka returns to the site of his most recent tournament victory. The 30-year-old comes into the event not nearly as sharp as he was last summer when he was riding on the strength of a win at the PGA Championship. Koepka has struggled with a knee injury in the year since and enters the event with just one top-10 finish on the season. He’ll go off the No. 1 tee at 1:50 p.m. (ET) alongside Viktor Hovland and Patrick Reed.

Jon Rahm makes his first start since ascending to world No. 1 when he won the Memorial Tournament two weeks ago. The Spaniard has been on quite a heater this season with five top 10s in six starts and a scoring average that ranks sixth on Tour. He’ll get his week started on the 10th tee at 12:40 a.m. (ET) in a grouping with Rickie Fowler and Bryson DeChambeau.

Tiger Woods is one notable star who is missing this week, as he rests in preparation for next week’s PGA Championship.

Here’s all the information you need to watch Thursday’s first round of the 2020 WGC-FedEx St. Jude Invitational on TV or stream it online.

Golf Channel will televise the action for the first round. It will air five hours of coverage from 2-7 p.m. (ET)

You can catch the full first round Golf Channel broadcast on golfchannel.com. Fans can also view Featured Group coverage of the opening round all day Thursday via PGA Tour Live, though you will need subscriptions to access both options.