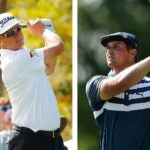 Charley Hoffman thinks Bryson DeChambeau is an example against bifurcation.

Bifurcation has been a hot topic of debate in the golf world this year. Ever since the USGA’s distance report was released in February, there has been talk of the pros and cons of rolling equipment back in the pro game.

This talk of bifurcation has been fiercely debated with stakeholders across the golf world weighing in on the polarizing topic. On this week’s episode of GOLF’s Subpar, Charley Hoffman offered up his thoughts on opposing bifurcation. He pointed to Bryson DeChambeau as an example of the uselessness of rolling equipment back.

“I think playing under one rules makes our sport really special,” Hoffman said. “I think Bryson is the perfect example of why we don’t need to do it. Roll back anything. The guy was average to long hitter prior and he went and worked his a—off and found a way to hit it further. That is a perfect example of getting better. Why would you want to roll it back?”

Hoffman went on to point out that even if there is a roll back, the DeChambeau’s of the world will still have an advantage. And better equipment isn’t the only reason pros these days are hitting the ball further. Better athletes are playing the game now and fitness has changed the sport.

“The best athletes in the world are starting to play golf now,” Hoffman said. “That’s why it’s going further.”

He also noted a commonly referred to solution for protecting golf course — firm greens and long rough. We see what happens each year at the U.S. Open under those conditions, and the Memorial Tournament last week reaffirmed that theory.

“It has to do with conditioning,” Hoffman said. “If you can get the greens firm, we struggle no matter how long it is.”

Check out the entire episode of Subpar below as Hoffman shares the player he refuses to play money games with, the best city to miss a cut in and more.