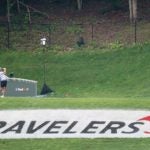 Five players have withdrawn so far because of Covid-19 concerns.

After a week and a half of the best-case scenario playing out in the PGA Tour’s return, the last several days have been a reality check for the world of golf.

“I feel great physically and I was obviously surprised and disappointed to learn of the test result,” Champ said. “It’s important now to take the necessary steps and measures to protect others, including my loved ones.”

Late Tuesday and into Wednesday, more leaks in the dam presented themselves as Graeme McDowell and Brooks Koepka withdrew from the event in an abundance of caution as a result of their caddies each receiving a positive test result. These positives triggered their own web that resulted in Koepka’s brother, Chase, also withdrawing.

Webb Simpson — the Tour’s most recent winner — also announced he had withdrawn from the Travelers after a member of his family tested positive for Covid-19.

Below is a summary of all the Covid-related WDs from the Travelers Championship.

Cameron Champ – WD’s after testing positive after arriving Tuesday. Champ did not play last week in Harbour Town, but he was at the course Tuesday as he awaited results.

Graeme McDowell – WD’d Tuesday night after his caddie, Ken Comboy, tested positive. Comboy did not travel with McDowell to Connecticut. McDowell tested negative twice this week — on Monday and Wednesday.

“We’ve spent a lot of time together the last 10 days,” McDowell said. “That is why I am withdrawing this week. I want to do the responsible thing.”

“I don’t want to do anything that might jeopardize the health of any player in the field or his ability to compete,” Koepka said. “I’m doing what I can do protecting my fellow Tour members, my PGA Tour friends, and everyone associated with the Travelers Championship this week.”

Chase Koepka – WD’d out of an abundance of caution after playing a practice round with Brooks and McDowell, both who have caddies who tested positive. Chase qualified for the event on Monday, but tested negative when he arrived on site.

Webb Simpson – WD’d out of an abundance of caution after a member of his family tested positive. Simpson tested negative when he arrived on site.

“While my tests this week were negative, I feel like it is my responsibility to take care of my family and protect my peers in the field by withdrawing,” Simpson said.

So far, there have been seven positives in 2757 tests conducted by the Tour.