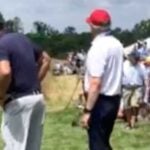 From left, Phil Mickelson, an official and a man who had been hit by a ball on Friday at The Country Club.

BROOKLINE, Mass. — Phil Mickelson hit over a TV crane, as a fan about 10 yards to his right iced the side of his head.

And that was only part of the weirdness.

Mickelson’s play this week at the U.S. Open was below his standards. In his first tournament on home soil in nearly five months and a week after his debut appearance on the controversial, Saudi-backed LIV Golf series, he shot 78-73 to miss the cut by eight.

But his flare for the odd was alive and well.

We’ve come to expect nothing less from Mickelson over the years — fairways and greens are not in the playbook — and this one had it all. To set things up, perhaps this week’s most bizarre sequence began in the second round after Mickelson’s tee shot on The Country Club’s 3rd went right. From there, let’s go in order, over a nutty two-minute stretch of about 2 minutes. You can decide which part is weirdest.

— Mickelson believed that his ball had hit a spectator. From about 100 yards away, he saw a man sitting down and being tended to, his head lowered, so he and caddie Tim Mickelson (also his brother), stopped, reached into the bag for a golf glove and signed the palm. The fan wouldn’t leave with just a bruise.

— But Mickelson’s ball hadn’t struck him. Sam Horsfield, from the adjacent 6th tee, had done that; Mickelson’s ball was about 10 yards to the left. But it was too late; the signed glove was out, and Mickelson bent over and offered it up to the man with as much care as you’d show in marking your ball on the green. “Here you go, sir, I’m really sorry,” Mickelson said, though the fan never looked up.

— As Mickelson walked away, he joked about his mistake in believing that he had hit the man. “It’s just instinct — I would normally think it’s me,” he cracked. The gallery in the area laughed.

— Mickelson called over an official. About 75 yards in front of him is a green TV crane, and Mickelson wanted to confirm whether he could get relief.

“I got a question for you,” Mickelson started off. “That TV tower, we can move it if we need to?”

The two talked for 12 seconds.

“It depends where the line is,” said the official, who had been attending to the fan.

For those who love their rules, here’s a breakdown: Mickelson was looking to apply Model Local Rule F-23, which states: “Line of sight interference exists when: The TIO is on the player’s line of sight to the hole (that is, the TIO is located on the straight line between the ball and the hole).”

The official walked back over to the fan.

— But Mickelson didn’t take any relief.

He just hit over the crane. His iron cleared it by about 20 feet, it went 144 yards, according to the USGA’s online scoreboard, and he had 84 yards left after that. From there, he got up and down for par.

At this point, Horsfield came over from 6, and the fan slowly stood up, with assistance from a man who appeared to be a medical worker. The official who helped Mickelson with the ruling stood close by.

It wasn’t clear who picked up the glove.