Phil Mickelson’s U.S. Open week was many things — but this was totally unexpected 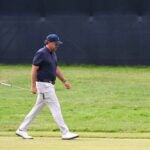 Phil Mickelson on Friday on the 18th hole at The Country Club.

BROOKLINE, Mass. — Phil Mickelson is on the 18th tee at The Country Club. The hole’s a spicy dogleg left. Get ready, U.S. Open! Or, since we’ve set up shop this week at Tom Brady’s old town, let’s goooo!!!

Our week here began in a similar, anticipatory vein, didn’t it? We’d get Phil at his Phil-est. Finally. (Phinally?) After the comments, after the exile, after the return last week with the controversial, Saud-backed group that started this all, he’d set the record straight with us, mix it up with the masses, chase after that ever-elusive Open win and just generally come out with his hair on fire. Instead, the latter was just slicked back.

And on day one, in his pre-tournament press conference, we got a whole bunch of …

Reporter to Phil: “How do you feel about the battering you received from my colleagues last week?”

Reporter to Phil: “Are you at peace with the real possibility of never playing on the PGA Tour again?”

Phil to reporter: “I am, again, very appreciative of the many memories, opportunities, experiences, friendships, relationships the PGA Tour has provided, and those are going to last — those will last a lifetime, but I’m hopeful that I’ll have a chance to create more.”

To describe it in golf terms, the press conference was kinda like hitting less than driver where you could go bold. He played his tee shot above, during Thursday’s first round, the same. It’s in the rough, too.

But, but, but! Phil Mickelson is looking down at his lie. He pulls one club from his bag. He puts it back and pulls another. He’s 155 out, and he’s going to take on the flag, front bunker be damned! To quote another Boston icon, Kevin Garnett: Anything is possiblllleee.

Everything was in play from the fans. They loved their No-mah. They loathed their Jee-tah. Let him hear it, Boston! A press conference of 50 reporters would be nothing like a gallery of 10,000 plus. And everybody would go home with a one-thumb salute.

They clapped. On Friday, a dozen faithful to the left of the 6th tee sang Happy Birthday. (The day before, he turned 52.)

Mickelson smiled, did give a few thumbs-up and never made any eye contact. On 18, one of Boston’s finest assigned to track Mickelson said he’s heard much, much worse.

A few minutes later, on our sequence from above, Mickelson hit his second shot over the green.

Nowwww, it’s gonna get good! Mickelson, after a drop to the right of the green, has a short-sided pin, about 30 yards away. Phlop, baby! Thirty yards forward, double that in the air, to within a foot. Cowboy Up, right, Kevin Mill-ah???

The six-time major champion had a lot to back up, but these are what the cowboys in life live for, right? The moment. The showdown at high noon — or in this case 1:47 p.m. on Thursday on hole 1; and 8:02 a.m on Friday on hole 10,  Maybe he wouldn’t talk, maybe the fans wouldn’t either, but Mickelson would flirt with the top of the leaderboard, because of course he would. It would be a story, and no one can spin a yarn, or a wedge, like Lefty.

On Thursday, he shot eight over, with five bogeys, two doubles and one birdie. Seventy-eight. On Friday, he was better — 73 — but nowhere near the cutline. Mickelson awakened somewhat with two-straight birdies on his final nine, on fun putts of 42 and 57 feet, then bogeyed the hole after that and parred out from there.

It flopped. It fell 18 feet past the hole, and he two-putted for a bogey.

Then he was gone.

For Portland, and the second tournament with LIV. He’ll play the rest of that circuit’s events this year. Will he be back at next year’s U.S. Open? Will he play another major? Last year’s PGA qualifies him, and his three green jackets get him into the Masters. But what if the powers-that-be pull the plug on the LIVers? On Wednesday, USGA CEO Mike Whan danced around anything definitive, though dropped a soundbite when he said: “I’ve heard that this is good for the game. At least from my outside view right now, it looks like it’s good for a few folks playing the game, but I’m struggling with how this is good for the game.”

But something was cemented this week.

You may have wondered how you felt about it all. Did you feel like it was a tragedy? After all that Mickelson has offered up over the past three decades, and this is the ending? No fire, no salutes, no fun. We don’t get to write these things, but fate must have a better script than 78-73, a few cheers and a few answers.

You may have also felt he deserved this. It was fitting. No way he was naive not to know the consequences, and as Rory McIlroy said on Tuesday: “My dad said to me a long time ago, once you make your bed, you lie in it, and they’ve made their bed. That’s their decision, and they have to live with that.”

Mickelson, forever quick-witted, engaging and a contender, was none of those things.

He was just another player.