WATCH: Jon Rahm massively melts down while in Masters contention 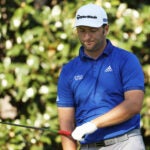 Jon Rahm during Saturday's third round of the Masters at Augusta National Golf Club.

Jon Rahm, during a practice round on Tuesday ahead of this week’s Masters, purposely skipped a shot through the water on the 16th hole at Augusta National Golf Club, and his ball rolled across the green and into the hole for a hole-in-one.

He skipped another shot on Saturday.

On the 8th hole during the third round of the Masters while he was in contention. On his way to a hole-in-seven.

Rahm, after a 316-yard drive on the 570-yard par-5, had 259 yards to the pin, on a downhill lie. With about a three-quarter swing with a fairway wood, Rahm rocketed his ball left and low. It went 166 yards forward and less than a yard into the air.

“Pfft, that didn’t even get off the ground,” Rahm said to himself before slapping the head of the club. “You got to be kidding me.”

“That one didn’t get past his right pocket,” analyst Nick Faldo said.

His third shot then didn’t get past a tree.

From 95 yards away, in the left rough, behind a collection of trees, Rahm hit the farthest right tree in his line of sight. The ball ricocheted left and into the bushes.

From there, Rahm took a drop, hit his fifth shot onto the green and two-putted from there for the double bogey. He started the hole at 10-under and left it at eight.