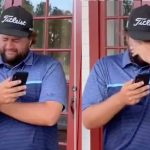 When Michael Visacki sank a 20-foot putt at a Monday qualifier for the Valspar Championship, it was the culmination of a lifelong dream.

Twenty feet of turf stood between Michael Visacki and a lifelong dream. Sink the birdie putt and he’d secure a spot in his first PGA Tour event. A dream a decade in the making was within his grasp — all he needed to do was make that putt.

The countless hours of practice in the oppressive Florida heat trained him for this moment. After 170,000 miles of crisscrossing the country in his Honda Accord, Visacki finally had a chance to reach his goal. Visacki and his caddie — fellow aspiring pro Kaylor Steger — picked a line and went through the pre-shot routine. Visacki drew his putter back and stroked the ball, sending it rolling toward the cup.

When it jarred into the back of the hole, he lifted his arms in triumph. At last, Visacki would play on the PGA Tour.

He walked back to the clubhouse with a golden ticket in his hand and called his father, Mike. Visacki could only muster three words: “I made it.”

The moment was equally emotional for Mike Visacki. Mike and his wife Donna had made plenty of sacrifices for their son as he chased this dream. Michael Visacki recounted times when his parents would go hungry at nights in order to make sure their son had what he needed to thrive. At other times, they would broker deals with junior events to accept their late entry fees when the family was between paychecks. It was all in hopes of a moment like this.

“I can’t thank them enough; I can’t repay them enough,” Visacki said. “Pops was emotional, never seen him cry so much. We’re not very much of a crying family, but this is the first time in a long time I think that we all cried because we knew how much work and effort, blood, sweat, tears, has gone into me trying to make it and to finally be able to do it.”

That struggle and never-say-die attitude has resonated with fans this week — and not just golf fans. The moment of Visacki’s phone call to his father has gone viral since Monday. The video has been viewed 1.4 million times on Twitter and outlets such as ESPN and TMZ have even shared the clip.

Why has the viral moment resonated so widely? Visacki has a theory.

“A lot of people give up on their dreams, probably because they can’t afford it,” he said as he fought back tears again. “But I’ve been lucky enough to be with my parents and been able to help me out sometimes to keep living it.”

On Thursday, that goal will be achieved at last. When the starter calls his name, Visacki will get to do something most never get a chance to — accomplish a dream.