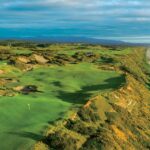 Bandon Dunes' fame is only going to increase the decades to come with high-profile amateur events hosted there.

The home of amateur golf in the United States was made rather clear Tuesday with one jumbo-sized announcement. The USGA is going to be spending a lot of time at Bandon Dunes.

The governing body will host 13 of its amateur championships at the famous Oregon resort over the next 23 years, including four years where multiple events will be held. It’s really as big as golf announcements get, at least since last year when the USGA announced it would have a new headquarters located in Pinehurst.

Pinehurst will host many U.S. Opens over the next three decades, and Bandon Dunes will host a ton of amateur events. East Coast and the West Coast. Sounds like a plan.

“With five championship-caliber courses and incredible support from the resort’s ownership, Bandon Dunes is the perfect location for these USGA championships,” John Bodenhamer, a USGA director of championships. “[Bandon Dunes founder] Mike Keiser has been an incredible advocate for amateur golf and his ongoing support for the USGA and our mission served as the vision for this partnership. We are excited to work together for years to come.”

The events at Bandon will begin with the U.S. Junior Amateur next summer, followed by the women’s amateur three years later in 2025. The Walker Cup will visit in 2029 and its female equivalent (the Curtis Cup) will follow in 2038. Both 2032 and 2041 will feature the men’s and women’s amateur events. The 2020 men’s amateur was a raging success just last summer. The entire schedule of announced events can be found below.