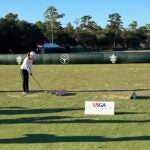 A small fence sprawls in front of the players this week at Champions Golf Club.

HOUSTON — At most courses and most tournaments, a driving range is just a driving range: a wide open field where ball after ball streaks into the distance after a soaring blast, or skitters across the ground after a less-than-optimal strike.

This week at the U.S. Women’s Open, that isn’t the case. With the USGA in town, Champions Golf Club has added a feature to its double-sided practice facility that you won’t see anywhere else.

Roughly 40 yards in front of the players, on each end of the range, there is a temporary chain-link fence covered in green tarp that spans the width of the facility. It’s not something you see at most events, and it caught some players off guard when they first saw it.

“I thought that was there temporarily,” said world No. 4 Danielle Kang. “I didn’t know that was going to be there the whole week. I came on Monday and I said, ‘Oh, is that going to go down tomorrow? And my caddie said, ‘No.'”

According to the USGA, the fences were erected to keep balls from rolling up from the opposite end of the range. With players able to hit from both ends of the practice facility, it’s a practical fix as just less than 300 yards separate the front range from the back range. A subtle fix, though, not so much. If Gary Woodland were to hit his patented stinger on this range, there would be dangerous projectiles shooting every which way.

“I’m not thrilled about it,” Kang added, noting that she typically likes to lay down her head covers to denote specific wedge yardages prior to every round. “So that’s kind of bringing in a lot of obstacles for me.”

But with dilemmas also come innovation. The fence has small gaps on either end of the range and Kang said she and her caddie had scouted a few potential spots to warm up so she could continue her normal pre-round routine.

For tech-reliant players, though, the barrier still presents a problem, because it impedes Trackman monitors from zeroing in down range on pins and can make for some wonky numbers.

“We just had to figure that out ourselves,” said native Texan Cheyenne Knight. “It’s different, but maybe after the cut they’ll take it down — it’s kind of weird.”

Not all players are bothered by the fence. For young players who haven’t been around long enough to develop exacting practice routines, a small bump in the road — or the range as it were — is the least of their worries.

“I just deal with it,” said Ana Belac, who is playing in her first U.S. Women’s Open. “Whatever is thrown at me — it doesn’t really bother me.”

Consider it good practice for the two courses the players will face, which no doubt will present many unexpected obstacles of their own.