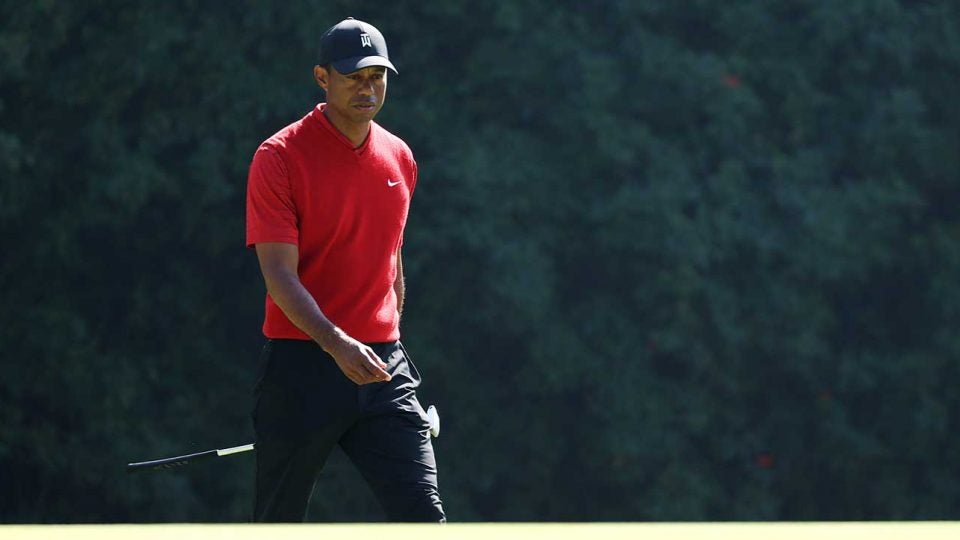 Check in every week for the unfiltered opinions of our writers and editors as they break down the hottest topics in the sport, and join the conversation by tweeting us @golf_com. This week we discuss Tiger Woods’ Masters odds, how often grandstands come into play during key moments on Tour, tough venues, the latest on Patrick Reed and more.

1. After finishing last among players who made the cut at the Genesis, Tiger Woods skipped his hometown Honda Classic and won’t play at Bay Hill next week either (where he has won eight times). His agent, Mark Steinberg, told ESPN in a text: “Back still stiff and just not quite ready.” Woods has said before that this is the new reality, but after a rough start at the Genesis and now a mention about his back from his agent, are Tiger’s Masters odds starting to feel inflated? (He’s currently the second favorite between Rory McIlroy and Jon Rahm.)

Dylan Dethier, senior writer (@dylan_dethier): I dunno. I mean, he’s won three times in his last 18 starts. He pulled out of Bay Hill last-minute last year, too. He’s the defending champ and he’s won there five times. It would be surprising if he won, but he should be in the pack of favorites somewhere.

Michael Bamberger, senior writer: Odds are meaningless in general and even less meaningful for Woods. Hard to see how his back and game are not ultimately impacted by the weather.

Josh Sens, senior writer (@JoshSens): Odds for any individual winner in a golf tournament are always inflated. But I don’t see Tiger’s (10/1 was the last I saw) as any more inflated than Rory’s at 15/2. As Dylan says, Woods would be beating the probabilities to go back to back, especially given his, um, back, but this is Tiger at Augusta. Anything is possible. And I’d be surprised if he’s not in the mix late Sunday. And not especially shocked if he won.

Alan Shipnuck, senior writer (@AlanShipnuck): Depends on how his back feels on Thursday morning. And Friday morning. And Saturday… Tiger proved at Royal Melbourne he is still the best player in the world under certain conditions. If Augusta National is firm and fiery he’s certainly the favorite… if he wakes up on tournament days feeling limber.

2. Sungjae Im came up big down the stretch at the Honda Classic and won by one over Mackenzie Hughes and two over Tommy Fleetwood. Needing to birdie the par-5 18th to force a playoff, Hughes took a mighty cut on his second shot from 254 yards out and hooked it hard into the grandstands around the green. But thanks to a local rule he was able to take a drop from 72 yards (with a great angle to the flag) and still give himself a chance to make birdie and tie Im. Hughes missed the potential tying putt, but the question remains: Are pros getting too much of an advantage when they can swing away knowing the grandstands are there to bail them out? What’s the solution?

Dethier: I don’t think players intentionally aim for the grandstands, but they definitely know they’re there, at least in the back of their minds. Some bleachers could be deemed penalty areas, so that those cushy drops come with a one-stroke penalty. Or, you could put in the pillar-shaped tall, thin bleachers from the Hogwarts Quidditch Stadium — and eliminate free relief. I like that option even better.

Bamberger: Oh, young Dylan! From somebody of your golfing sophistication. Of COURSE they aim for grandstands when that’s the best play (not in this case). The drops are often comically generous but these events are also televised entertainment (not my view but the prevailing one) and they allow the show to go on with minimum disruption.

Sens: Mad props to the Harry Potter proposal. But I prefer what the R&A did at Portrush last year. Grow the rough up around the grandstands. Make “grandstopping” less appealing.

Shipnuck: Yes, the gnarly lies in the drop circles at Portrush gave the errant shots the bad lies they deserved. That’s the simplest and best solution.

3. Honda Classic host PGA National showed its teeth this week, as Im’s six-under total was the highest winning score in relation to par on Tour in a non-major since the 2016 Farmers Insurance Open, and this was also the first non-major since 1996 without any players recording a round of five under or better. Does the Tour need more grind-’em-out bogey-fests, or do you suspect they’re a turn off to fans watching at home?

Dethier: Can’t speak for everyone at home, but I was much more likely to tune in knowing I was in for a healthy mix of birdies, bogeys and “others.” I’m not here to argue that PGA National is among the great golf courses on Tour, but the all-or-nothing suspense down the stretch does make it particularly entertaining. Nobody shot better than four under all week — that’s wild! Challenging conditions are always entertaining.

Sens: What Dylan said. Bomb-and-gouge birdie-fests can be good fun now and then. But I think most fans want to see these guys work hard for it.

Shipnuck: Variety is the key to an entertaining Tour schedule. But I do enjoy the tension that comes with a really tough setup — it’s like a 0-0 game in baseball, where every little moment is fraught. That’s way more fun to me than a pushover course that doesn’t penalize mistakes.

Bamberger: Well said, comrades. As we saw at the Presidents Cup, little in golf is more interesting than a fast course.

4. A week after Brooks Koepka and Peter Kostis made headlines with remarks about Patrick Reed — which was followed by a Reed victory in Mexico — NBC on-course reporter David Feherty called Reed “Captain Oblivious” in an interview with SI.com. “I mean, There is no God was the first thing I said after he’d won last week,” Feherty said. Our Michael Bamberger also wrote that until Reed owns his rules blunder, he will remain hard to root for. Would owning his initial rules infraction in the Bahamas do him any good in the court of public/commentator opinion, or has the ship already sailed?

Dethier: It would help big time. He should have gotten out in front of it initially, of course. But I’ve heard players and commentators alike shaking their head at Reed’s handling of the entire situation. The general feeling is that he’s a pleasant guy to be around day to day, but his reputation — as a sneak — is a tough one to shake unless he shows some contrition.

Bamberger: The only thing that bought Reed time was the fact that he was on Tiger’s Presidents Cup team. This is potentially volatile because if Reed gets pushed into a corner he might start pointing his own finger. I think if Reed watched the video — and any other video that may be out there — alongside Feherty or somebody like him and said something credible to (let’s say) Feherty it would hurt in the short term and help in the long term.

Sens: Not too late. The sporting public’s capacity for forgiveness runs deep. I’d have to turn to a shrink for confirmation, but I think it has to do with our yearning to feel good about ourselves and our own generosity, partly by feeling morally superior to the star we’re forgiving. Or something like that.

Shipnuck: Ehh, it’s pretty close to too late. But admitting he’s screwed up is certainly the first step if Reed is ever going to outrun his shadows.

Sens: Oh, come on, Alan. A well-orchestrated cry-fest in front of the media? Heartfelt repenting? That wouldn’t move you at all?

Shipnuck: At this point it would be hard to believe it’s heartfelt! But I guess we have to give everyone the chance to grow up and own their mistake. I’d hate to miss out on some good ol’ fashioned repenting.

5. The USGA elected J. Stuart Francis to be its 66th president, which was announced at the USGA’s Annual Meeting in Pinehurst, N.C., on Saturday. A member of the USGA’s Executive Committee for six years, Francis, who was named president-elect last year, succeeds Mark Newell. If you are Francis’ go-to assistant, what’s the first issue you’re telling him to get behind?

Dethier: Make the U.S. Open hard. Really hard. One week a year, give the people what they want: carnage!

Shipnuck: Solid answer. But clearly he needs to pull the full Kenesaw Mountain Landis and show some backbone on the distance issue. For decades the USGA has been asleep at the wheel. If J. Stuart wants to be more than the usual anonymous caretaker, it’s time to take a stand.

Bamberger: Restore sanity to course distance by rolling the ball WAY back for elite play. Driver, 8-iron at 13 at Augusta is an insult to the hole.

6. An unfortunate golfer’s shanked tee shot off the opening hole of the Old Course in St. Andrews went viral this past week. What’s the worst shot you’ve ever struck (or witnessed) on an opening hole?

Dethier: Good excuse to dig up this video of Tiger Woods chunk-topping one off No. 1 at Abu Dhabi. Technically his 10th hole of the day, but whatever. Bonus points if you can translate his post-shot epithet — I think he said “that’s f—– incredible,” but have a listen for yourself. The incredulity of the announcers is the cherry on top.

Shipnuck: When I was a cart boy at Pebble Beach every day brought unimaginable horrors. I loved it.

Sens: On the 18th hole of a Boston-area muni, I once shanked a drive into a crowded parking lot — and shattered the windshield of my own car. But for first-tee mishaps… Ian Baker-Finch’s snap-hook off the tee at the Old Course, so long ago the year I can’t now recall. That was painful. Also, at a crowded muni in Rhode Island, sometime in the mid-80s, I watched my college roommate whiff two consecutive attempts with a driver as a group of Buddy Cianci-types razzed him mercilessly from the clubhouse steps. My buddy looked like he was going to cry. I think he did, actually. On his third try, he dribbled one about four feet in front of him.

Bamberger: With Tom Watson, in a charity thing, first hole, driver. Farther right than it was out. Said Watson, “Could you swing faster?”