In this installment of the #AskAlan mailbag, GOLF senior writer Alan Shipnuck answers your questions about how a fall Ryder Cup would work, the thing he’s most looking forward to in golf when the coronavirus crisis ends and more.

The ‘Ronapocalypse is upon us. You’re filling the time capsule to ensure golf survives. Books. Film. Footage. Equipment. Course drawings. What are you passing down to ensure the game’s survival on the other side of disaster? -@1beardedgolfer

Man, so much pressure!

Books: Down the Fairway. Golf In The Kingdom. To The Linksland. Golf Dreams. The Bogey Man. The Spirit of St. Andrews. The Story of American Golf. The Confidential Guide. Jenkins At The Majors. Bud, Sweat & Tees. Alister MacKenzie’s Cypress Point. The Golf Courses of the British Isles. A Good Walk Spoiled. The Golf Omnibus. Tiger Woods. Arnie.

On Match 2 rumors, what are your feelings? What would be a good undercard for it? -@_Qunquistador

Mixed, to say the least. The first Match was mediocre golf and bad entertainment, with a dash of technical ineptitude. If they do it again every dollar better go to charity or I’m out. Tom Brady and Peyton Manning could bring a fun element because both are performers and have a pretty good needle, but I’d rather see real golfers. My picks would be Rory and Brooks. It would be fun to watch them team up and take on the old dogs. I think Phil and Tiger would have more chemistry as partners, because they’re more frenemies than rivals. If they treat the whole thing like a buddy movie it could be entertaining.

If you were a touring pro, who would be your staff bag sponsor? -@WallDwarf

A member at my course was perfectly fine 2.5 weeks ago and she died today of the virus. Her husband also has the virus. Knowing a golfer or golfers who died from the virus will unfortunately happen to all of us. Please share ideas for a memorial. This is a special one, Alan. -@dave_hegan

Wow, I’m sorry to hear this. It’s a very sobering thought. I think the flagstick has become symbolic of these times, because we’re all trying not to touch it. Perhaps the flags on the 1st or 18th holes of every course should carry a memorial to those we’ve lost. Or maybe a little flag that flies below the regular one. To have them emblazoned with a red heart seems appropriate, or a first aid cross. I will put this out on Twitter to solicit more ideas.

If you had to choose the most perfect hole to hit that highly unlikely hole-in-one, where would it be? Then, please name your dream fourball? PS: sorry if some of these were answered before – not sure! -@TiaanEllis

I’m sure I have but these are evergreen. Given my roots at Pebble Beach — I was a cart boy there for three summers — number 7 or 17 would be quite sentimental. The 12th at Augusta would be utterly cool because of its place in golf mythology. Same with #5 at Royal Melbourne. But I think I have to go straight chalk and take the 16th at Cypress Point, probably the most epic hole on the planet. Dream fourball: the 1930 Bobby Jones, 1960 Arnold Palmer and 2000 Tiger Woods. 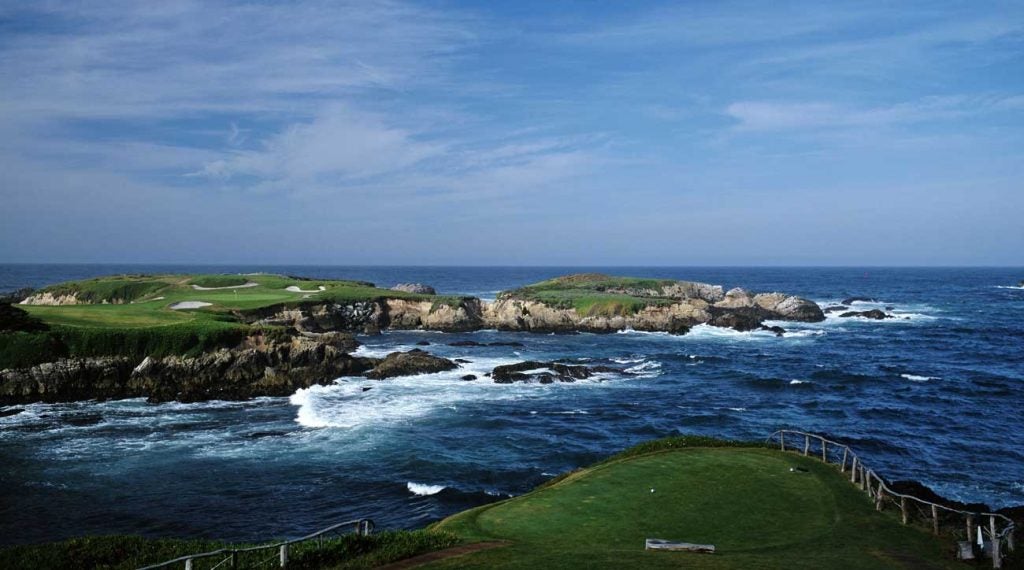 If you flushed your tee shot at Pebble’s 7th to a raised COVID-countering cup and your ball went past the pin then screwed back to be resting against the plastic/ noodle, would you count it as a hole-in-one? -@GeorgeBooth73

It’d be a helluva story but I couldn’t count it as my first. The magic of the ace, or so I presume, is the delicious anticipation as the ball tracks toward the hole and then finally disappears, setting off all manner of delirium. In this case you wouldn’t even know it was an ace until standing over the ball. Now, if I’d already made one I might add this to the tally, but even that is kind of weird.

What are you looking forward to the most in golf? -@JayRevell

Playing with my friends. I miss spending time with them! That’s what golf is all about for me. I’ve been invited by strangers to play some pretty sparkly courses but I have zero interest in that. The game to me is mostly about who you’re with, and that’s the void I’m feeling now.

You just won five free lessons with the teacher of your choice. Congrats! Will it be Cameron, Butch, or Brandel? -@BobbyTeeItUp

I love George Gankas’s vibe and his philosophies. I’m friends with Tony Ruggiero and I’ve profiled Joseph Mayo. All would be great choices… but I’d probably choose Butch. I’ve seen him give lessons to amateurs and he keeps it simple, which I need. But more than that, he’s one of the great storytellers on the planet. I would mostly want to pick his brain about the players he’s taught, though I would need him to dispense a few swing thoughts along the way.

Is Coronavirus the ultimate equalizer in terms of motivation/fitness/preparation and am I crazy for suggesting the great Wyndham Clark, Tom Hoge or the incomparable Joost Luiten collect majors this year? #Masters #USOpen -@JustShake

Nah, the ruling class will always benefit in times like these. Tiger and Phil, among others, have incredible natural-grass practice facilities in their backyards, giving them a real advantage. Others have full-blown simulators in their houses. Players with home gyms are way ahead of those who have had their public facilities closed down. Those with their own planes can get away to remote spots with good courses. Motivation is harder to gauge, but I don’t think COVID-19 is quite the equalizer you imagine.

Ship, just get the feeling that with all the time off, a healthy TW may have his best chance to snag a couple quick majors if they get played in relatively short time and if he’s playing well. If he’s on 17 going in the next 2-3 years, watch out Golden Bear. -@cavedoc

The only problem with this theory is that all the majors could be clustered in the fall, and it could be chilly weather all the way through; when the temperatures fall so do Tiger’s chances of winning, given the creakiness of his back. Just today Toronto banned public gatherings through the end of June — there are various loopholes in the edict but it is a bellwether for where we are all heading, especially in the U.S., which is in much worse shape than Canada. I think the play-by dates are going to creep further and further off into the distance and late-autumn will become our only chance to cram in a bunch of majors in 2020. If it happens, you’re right that a player can go on a heater and forever alter his legacy… but I don’t think Woods will be that guy.

Tournaments
#AskAlan mailbag: Which alternate month should each major be played in 2020?

If the Tiger/Phil rematch happens, at which course would you enjoy seeing them play? -@CTcard44

For sure, the course is an important part of the show. That was part of the problem with the first Match: Shadow Creek had a lot of mystique but turned out to be kind of tacky and outdated. Phil has a lot of friends at Cypress Point, and in these troubled times an otherwise cloistered club might open their doors knowing how much we all need a break from the gloom and doom. That would be my first choice but Pine Valley, National, or Fishers would be quite swell, too.

If the coronavirus was a major championship layout which one would it be? ’99 Carnoustie? ’02 Bethpage? -@MidwesternGator

If CBS replayed a Masters from years past next week, what tournament would you want to watch? -@JasonKrump

I think 1975, because I’ve never seen more than the highlights. Or maybe 2011 — that was one of the nuttiest Sundays ever and I couldn’t fully enjoy it because I was too stressed out about the story I had to write. But honestly I’d watch any of them… except 2008. That was a snooze.

Hearing rumors that they may postpone the Ryder Cup. How do you balance the “fair qualification process” argument vs “pro golf is entertainment and we are going to NEED the RC come September”? -@mjcostel27

The balance tips heavily in favor of playing it any way we can. I’m totally fine with each captain being allowed to fill out his team with 12 picks. Deep down, Harrington and Stricker already know who they want on their squad. Sure, the lack of a lengthy, transparent qualifying system hurts younger players who don’t have as much of a body of work, but, to quote one of our great thinkers, it is what it is. 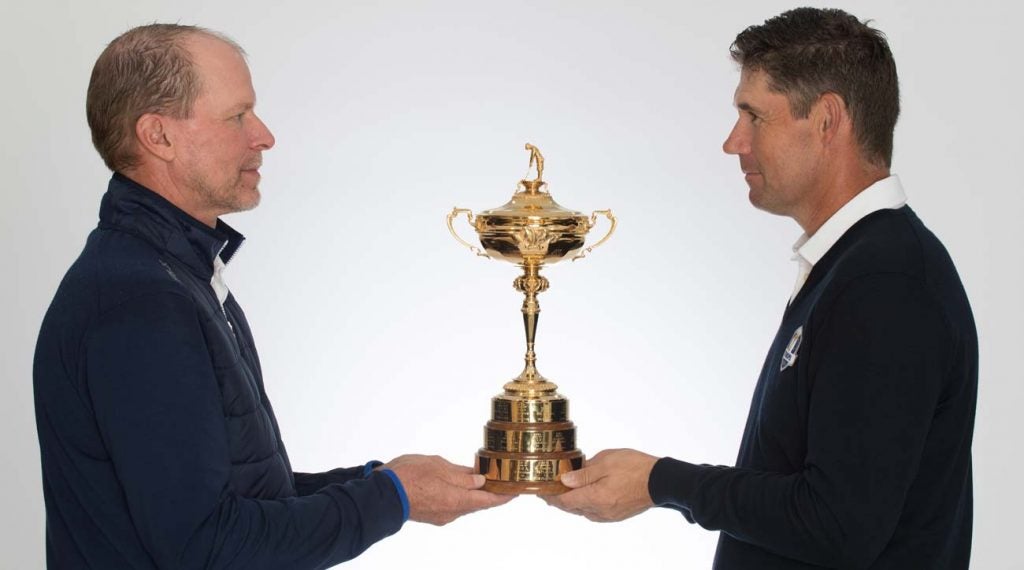 What’s the one golf shot you play over in your mind the most? -@ThomasMantz

Panama City, Fla., April 1994. I’m an intern at SI sent out to write my first big story, about the scene on the Nike tour. I was utterly stressed-out by the magnitude of the opportunity, to say nothing of the complications of trying to figure out a crappy loaner laptop. I wound up staying in a weird condo complex redeemed only by the fun, funky par-3 course on the grounds. There was a mish-mash set of janky clubs in the garage so one evening I walked out to play a few holes to clear my minds. I know this sounds like a setup ripped from the pages of Penthouse Forum but just as I arrived on the tee box of the hole closest to my condo — number four, I believe — a very attractive young woman in short-shorts arrived, playing with her mom, whom, it must be said, was also kind of a babe. They invited me to join.

After a practice swing or two I teed up a 7-iron. I don’t recall the brand but this club was at least 20 years old. Somehow I found the sweet spot, which was the size of this period: . It was the purest strike of my life and all these years later I can still summon the sensation of it radiating through my body. The ball traced a majestic arc toward the heavens and then landed about a yard right of the flag, on a little slope. My ball trickled ever closer and the gals I was playing with started hooting and hollering. I thought for sure I was gonna make an ace but it lipped out. That wasn’t my only heartbreak, as at round’s end I got the Heisman from both mother and daughter. Still, I’ll never forget that shot.