#AskAlan mailbag: Which alternate month should each major be played in 2020?

In this installment of the #AskAlan mailbag, GOLF senior writer Alan Shipnuck answers your questions about a potential fan-less Ryder Cup, which months the 2020 majors should be played, the effect of the coronavirus on golf courses and much more.

Alan, what foursome would be the most fun to watch play 18 holes on a simulator on the same course in different home locations? You need the smack-talk flowing so based on that: Phil, Tiger, Rory, Rickie. -@forearmshivers

I agree that trash talk is key so I’m puzzled by your inclusion of Rickie, who is far too earnest and bland. And as we saw at The Match, Tiger and Phil have zero chemistry together. I’ll take Phil, Jordan, Brooks, and Pat Perez, please and thank you.

You and your BFFs Brooks and DJ sneak onto Pasatiempo this weekend. They play left-handed. Will you beat them? -@BobbyTe66671078

Without question! Well, probably. It’s one thing to freewheel on a range with no target and no consequence — Brooks and Dustin have shown they’re both quite good at that because of their spectacular athleticism and hand-eye coordination. But to build a round you have to play so many touch shots, awkward stances, little 3/4 swings when you’re between yardages, big-breaking putts… I think all of these things would be a challenge standing on the wrong side of the ball. This makes Rickie’s 94 in his match against JT that much more impressive. If I play well at Pasa I’m going to shoot around 80. If I play poorly I’m gonna post 88-90. On that fiddly course I doubt either of those bruisers could beat those numbers playing left-handed. Of course, if we’re streaming it for social media I’ll likely choke my guts out and shoot 97, in which case it could be close.

Tournaments
Tour Confidential: Would you prefer fan-less majors in 2020 or no majors at all?

If you could pick a new month for every major, what and why? -@ScottMichaux

Assuming we’re locked into this year’s venues, and that it takes until the end of the summer to beat the ‘rona (which is optimistic but let’s go with it):

October: The Masters would be glorious in the fall foliage, and it feels right for it to be the first major, as always.
November: U.S. Open. The weather in New York in early November is often quite nice. And if not, Winged Foot will be a monster, which would make for a memorable national championship.
December: Open Championship. Dark, cold, nasty, miserable… sounds wonderful to me.
January: PGA Championship. San Francisco has always enjoyed a glorious Indian summer, with some of its best weather in October-November. With climate change the early winter is often lovely. And if it’s cold and foggy… all the better.

All four 2020 majors are currently in limbo due to the coronavirus pandemic.

What level of conditioning is needed to keep a course “ready” if not fully playable? How many courses can do this if they’re not pulling in any income during a long shutdown? -@LinksPlayers

I’ve been enjoying following these discussions on Superintendent Twitter. If I’m understanding your question correctly, you’re referring to a course that’s closed for play right now but would be kept in decent shape so it’s pretty close to being ready to go once the various restrictions are lifted. The consensus is that it would take 3-4 greenskeepers to preserve the greens, prevent widespread turf damage and keep the bunkers from deteriorating. I’m guessing most private clubs can manage this skeleton staff for a few months, though beyond that could be a challenge. Public courses will suffer more, unfortunately.

How likely is the PGA Championship to change its host course? -@PintosJavi

I haven’t really understood the discussions about moving the PGA — every metropolitan area is going to be affected by COVID-19. If the numbers for one city are lower right now that is sure to change in the coming weeks/months. So unless we’re going to start taking the majors to remote, rural areas all the current venues are as good as any.

There’s a possibility of the Open and Ryder Cup being played behind closed doors. I understand the R&A’s rationale for the former – so the 150th playing can take place at St. Andrews – but the latter is an absurd notion, the galleries MAKE the Ryder Cup what it is! What say you, Alan? -@TheGolfDivoTee

The notion of playing pro tournaments with no fans lasted about 24 hours, and I don’t think it’s coming back. As I tweeted when Jay Monahan first tried to sell this idea at the Players, it still takes hundreds and maybe thousands of people to conduct and televise a pro tournament, and they’re flying in from all over the globe. If the virus threat is still too grave to allow fans on-site it becomes impossible to justify holding the tournaments at all. As for the Open, St. George’s is one of the least-loved courses in the rota so no one will really squawk if it gets passed over. 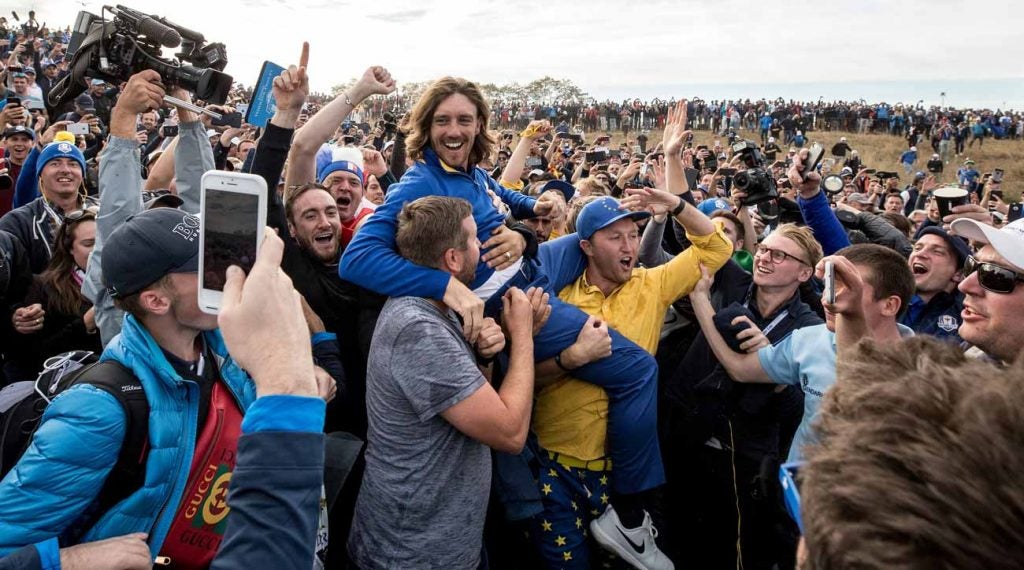 The Masters is a limited field event on a tricked-up course with a bunch of amateurs and geezers hogging precious spots; why do you guys act like it’s a major or something? -@frankprocida

I agree with your thesis and have never tried to hide my disdain for the obsequious reverence of all things Augusta. And yet the Masters has a way of delivering transcendent moments that makes me forget about all of that and just enjoy and marvel at the drama. You should try that sometime.

What’s the greatest non-player job in all of golf? -@GrantLeigh3

It has to be the Tour caddie, right? You’re in the middle of the action, have some say in the outcome, and in victory you get to celebrate lustily. But when things go pear-shaped it’s the player who takes all the blame! You’re part of an exclusive fraternity, can make great money, and you get all the golf gear in the world for free. You enjoy just enough fame to be beloved by fans but without having to endure any of the hassles of being a real celebrity. Sounds like a good gig to me.

Since bunkers are usually easier than rough (for good players) & harder and more money to maintain, are any golf designers going the sandless bunker route? To that end, what are your favorite sandless bunkers? I’m having trouble thinking of them offhand. -@Frazerrice

Well, Sheep Ranch will elevate this conversation because it doesn’t have a single bunker. The site is so windy Bill Coore and Ben Crenshaw reasoned it would be impossible to keep sand from blowing away, so they didn’t even try. But the greens are surrounded by all manner of humps and hollows to make the pitching and chipping more interesting. My favorite sandless bunkers are the “dry washes” at Bel-Air, which Tom Doak brought back to life with his recent renovation. They are basically little creek beds that are grassed over but left rather wild. They are visually intimidating, but if you get lucky with the lie you can play shots out of them. The dry washes make for a much more interesting feature than traditional bunkers.

I formally request the Shipnuck Plan for us to get our Spieth back. Go bold, sir. Sans Greller? No more Cameron? What’s the plan? -@robert_curran3

I would support one or both of those moves, just in the name of changing things up. But maybe having four or six or eight months off due to the virus is all Spieth needs. He’s clearly tunneled deep into his own head, and the relentlessness of the Tour schedule has never allowed him to fully reset. This sabbatical will certainly shift Spieth’s focus and give him the time and space he needs to work on his game and rebuild his confidence without the constant pressure and scrutiny of tournament play. Now, if he struggles in 2021 (or whenever the Tour resumes) it’s clearly time to blow things up. I’ve always contended that Jordan is too smart and too tough and too resilient not to figure things out. This forced time off will put that to the ultimate test.

What are your favorite YouTube tournament rewatches? Highlights or full coverage? -@Topfrolf

Definitely the whole enchilada. It’s so fun to immerse yourself in the telecast and all the little details. I gravitate toward the Opens, but you can pick almost any major championship broadcast from the 20th century and it will be loaded with treasure. I highly recommend Sean Zak’s “A Pod Unlike Any Other” as a companion piece for any Masters telecasts. I was recently part of the discussion of the 1989 tournament and it was a revelation to study the telecast so forensically. To cite but one example, on the 71st hole Scott Hoch pulls off one of the nastiest, naughtiest shots I’ve ever seen, from a horrendous spot behind the 17th green. If he had made the ensuing short par putt he probably wins the Masters and his spinny bump-and-run is one of the most celebrated shots in tournament history. But Hoch missed the putt and that shot has been lost to the dustbin of history. Every telecast has similar moments. The build-up is exquisite and mere highlights can never capture the tension.

Why can’t a mini Shells Wonderful World of Golf take place each week and be broadcast live by iPhone with all winnings going to charity? A few spaced-apart crew filming and a couple of volunteer Tour stars and there would be interweb gold created. -@JoelBShaw

I think our best hope for something like this is for some players to do it guerrilla style, enlisting a friend or two to tag along and film everything. No purse, nothing formal, just some low-tech golf for all of us to enjoy. Not sure why this hasn’t happened already, to be honest.

What’s the course itinerary for your next dream golf trip? -@LinksProf

How are the greens rolling today at Pebble? -@JacksJoeSalinas

Put it this way: there ain’t any footprints.