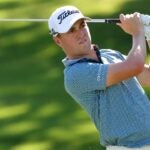 Justin Thomas' streak of made cuts has come to an end at 21.

Good on ya, JT. Even though you’re not happy right now, good on ya.

Justin Thomas won last week at the PGA Championship in thrilling fashion. He celebrated Sunday night, as we all would have. He took a play out of Nick Saban’s playbook and enjoyed it for 24 hours, promising to refocus after that and move on to the Charles Schwab Challenge.

And for that alone, we should applaud Thomas. Many pros decide after an exhausting win to take a break and not play the next week, even if they’ve already committed. It sets back those secondary events, in a way, where promotional materials and tickets sold become less meaningful when the best in the world suddenly pull out of an event. Thomas had every reason to do it, but didn’t.

Instead, he gamed it down at Colonial, went through all the typical pre-week rituals like press conferences and practice rounds. But when it came time to play the tournament, Thomas didn’t have that magic left.

The No. 5 player in the world put together an average 71 on Thursday, with just three birdies, holding on tightly to a Tour-best streak of 21 straight cuts made. That was the undercurrent of his winless season up until Southern Hills. Thomas had elevated his floor to the point where he wasn’t missing any cuts. If you gave the guy four rounds, he was going to finish in the top 35, never worse. It was reminiscent of what Jon Rahm did prior to winning at Torrey Pines last year. Always good, often great, never bad.

But Thomas’ 71 put that streak of brilliance in danger. He would have to at least break par Friday to make things comfortable. And he got off to a great start in that chase, making two birdies in his first six holes. But it was holes 7 through 10 that did Thomas in.

JT dropped shots on his next four holes, with bogeys on 7 and 8, a triple bogey on 9, and another bogey on 10. From one under to five over, well inside the cutline to well outside it, just like that. The broadcast was well aware — their featured group (inclusive of a charging Scottie Scheffler) suddenly became a Friday grinding group.

Thomas added birdies on the 12th and 15th moving to three over, just as the cutline solidified itself at the one over mark. He’d have to add two more birdies in the final three holes. When he started with two pars on 16 and 17, Colt Knost told TV viewers exactly what Thomas needed now. “He’s gonna have to hoop it at the last,” Knost said. He would not hoop it at the last.

Thomas’ final approach bounded over the 18th green, leaving him a tricky up and down, which he made, for a second-round 72. Three-over total, two shots out of the cutline. Streak over.

The next time Thomas appeared on the broadcast, he was rifling through flags, hats, balls and shirts, signing autographs for the masses.

“When you could just take a step back and realize how much it means to these kids,” Immelman. “They made the effort with their parents to come out and watch you play. Give ‘em a few minutes, it means so much to them.”

Well said, well done, by all.