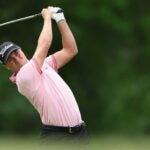 We're all winners, when you really think about it.

But what about us? What did we win? The joy of witnessing a terrific comeback victory, for one thing. That was terrific. Even better, though, was the greatest gift of all: Knowledge. There’s nothing like the heat of battle to teach us about the people we spend the most time with — even if “with” usually involves us watching those people on a TV screen.

So what did we learn about golf’s newest major champion? About his approach to the game? About his golfing mindset? Let’s dive into some truths about Justin Thomas.

1. He learned to move the ball at the urging of Tiger Woods.

We’ve heard Thomas talk about this before, but it felt particularly relevant this past week, when Thomas worked the ball all over Southern Hills in brutal conditions. He’s worked on getting more versatile with shot shapes over the last five years, he said. You don’t always need it, especially if conditions are soft. But at major championship tests it can come in handy.

“Honestly it was first time I played competitively with Tiger, I just asked him and I was like, ‘You know, what we’ve played a lot of fun golf together but that was the first competitive round. What do you see?’ He said, ‘You don’t move the ball enough.’ For me it was like, he’s pretty good, he said that, I should probably try it.”

2. He doesn’t look at ShotLink data ahead of tournaments.

Thomas is old-school in more ways than one. While plenty of Tour players pore over data to determine optimal strategy ahead of an event, he thinks that’s probably overrated. It’s just golf, after all. He finds more value in a practice round than in looking through how other players tackled the hole. Nor did he consult anyone that played Southern Hills at last year’s Senior PGA.

“I think, trying to say it as politely as I can, it’s pretty obvious,” he said. “I’ve looked at stuff before and it’s like you get to go look at Riviera, 13 is a hard hole. Like, no kidding. It’s a tough hole. I didn’t need a piece of paper to tell me it’s a tough hole.”

Thomas cited the famous drivable 10th hole at Riviera as another example. Nearly every pro now tries to drive the green, but Thomas still prefers to lay back.

“The percentage play is to go for it but for me it’s not,” he said. “I mean, I play that hole 1-, 2-under basically every single year laying up and it’s just a better fit for me.”

That doesn’t mean Thomas is anti-preparation. It just means he prefers to rely on his instincts. That’s why it was important for him to see Southern Hills in advance, so he came the week before the tournament and played a practice round.

“I think you just play the golf course and make of it what you can. That was huge for me coming Monday last week because those practice rounds can be long and grueling,” he said.

3. He has a more aggressive caddie now.

Given his success calling golf for NBC, we know how good Bones Mackay is at talking. Several player-caddie conversations caught on microphones over the weekend made for top-notch viewing, too. As for the biggest difference between Bones and Jimmy Johnson, Thomas’ former caddie?

“He’s definitely more aggressive,” Thomas said. “I think that’s pretty apparent or easy to understand from the past. He’s definitely a lot easier to convince if I want to try something I may be shouldn’t than Jimmy.”

I guess when you’re used to caddying for Phil Mickelson, everyone seems like a conservative player.

Thomas’ buddy Rickie Fowler floated some doubt in the air when it came to his future on the PGA Tour, explaining that he currently thinks the PGA Tour is the best place to play but adding, “To be straightforward with you guys, I haven’t necessarily made a decision one way or the other.”

Thomas and Fowler are close friends, so they’ve certainly talked about this. But Thomas has been more straightforward in declaring his allegiance to the PGA Tour.

“I’m very content with the direction the PGA Tour is going, and I think it’s just continue to go get better and better, very quickly, too,” Thomas said. “I think a lot of players feel the same way, which is very important. We have a lot of loyalty to the Tour. They have done a lot for us.

“So I mean, I’m not sure what the end game is going to be, and I think a lot of people very similar to myself are just kind of ready for it to happen or not and us stop answering questions about it.”

We saw it on a blustery Saturday at the Players, when Thomas shot an awe-inspiring three-under 69. And we saw it again when he opened 67-67 in the worst of the weather at Southern Hills. So what is it about the challenge that brings out the best in Thomas?

“I think it’s because I focus a lot more on what I’m trying to do in terms of the shot I’m trying to hit, the trajectory, the distance, and think less about golf swing,” he said.

Early in the week he described getting frustrated on the range because he felt uncomfortable over the ball, but when his coach-slash-father Mike simplified things and told him to just hit certain shots and forget about positions, he suddenly started flushing it. Sometimes it’s important to remember to play golf rather than play golf swing.

“When I’m out there playing a competitive round I can’t try to get my club in certain positions and whatnot, and I think when I get in conditions like this, I just get out there and I try to hit shots and try to hit numbers as opposed to trying to get it in a certain position and going from there,” he said after his Thursday 67. “That’s something I really tried to do today, and I feel that it worked pretty well.”

6. He wants his father to be as tough as possible.

You get the theme by now: Thomas likes to be challenged. That includes getting some tough love from his lifelong coach (and lifelong father).

Mike Thomas is a loving father, so it’s not in his nature to go after Thomas when he doesn’t deserve it. But sometimes his son thinks that’s exactly what he needs.

“It’s a lot different,” Thomas said of his player-coach relationship. “I get pissed at him sometimes, and I think as a dad he doesn’t want to — he’s not going to go full Butch Harmon or Pete Cowan and tell me I suck or that’s not very good or whatever it is, and sometimes I would love for him to say that just because I want to hear it.

“I mean, I have to remind him sometimes, you’re not my dad out here, you’re my swing coach, and I need you to tell me if something is wrong. I don’t need my ego boosted. I’m here to try to win a golf tournament and play well, so do your job kind of thing.”

Whatever he did this week seemed to work.

Want to learn something from Thomas’ success in tough conditions? Take notes on how he tackles the wind. He focuses on clean contact but also on the specifics of his starting line. At Southern Hills, there were mostly crosswinds (rather than holes being directly into or against the wind) which meant the ball was constantly battered sideways.

“You have a lot of crosswinds, so your ball is doing a lot of curving as it’s in the air,” Thomas said. “In order for it to come down on the target I want, I need it to kind of start in a certain window. Although hitting it solid is important, club face control is also extremely important.”

8. He’s offended by an expensive beer.

Thomas spoke out against the $19 beer at Southern Hills concessions after an early-week photo sparked outrage. They say it’s important to find a cause that’s meaningful to you and, well, Thomas seems to have his.

“It’s just a bummer,” he said. “You want people to come to the tournament. If I’m on the fence and I’m looking at the concession stand, that’s not the greatest thing,” he said. He acknowledged that beer prices aren’t going to be make or break for most golf fans, but still — he’d like to see things reduced.

“I was just blown away because I’ve never seen a beer $18 or $19 in my life. Guys have been talking about it, so I, you know, had to stand up for the fans. Felt like it was right.”

Thomas brought this up a couple times, so it’s only fair that we honor him the way he’d like to be honored with our final truth. Thomas hit a cold shank on No. 6 on Sunday, traveling just 108 yards on a 218-yard hole. It was a jarring shot in a giant moment for one of the game’s great irons players. So jarring, in fact, that Thomas had no choice but to laugh it off, push past it and escape with bogey.

“I just cold-shanked it. I don’t really know how else to say it,” he said post-round. “It was the best bogey I’ve ever made in my life, that’s for sure.”

Cheers to you, Justin Thomas. Keep winning more and we’ll keep learning, too. Though we wouldn’t mind a cut of that prize money, too.