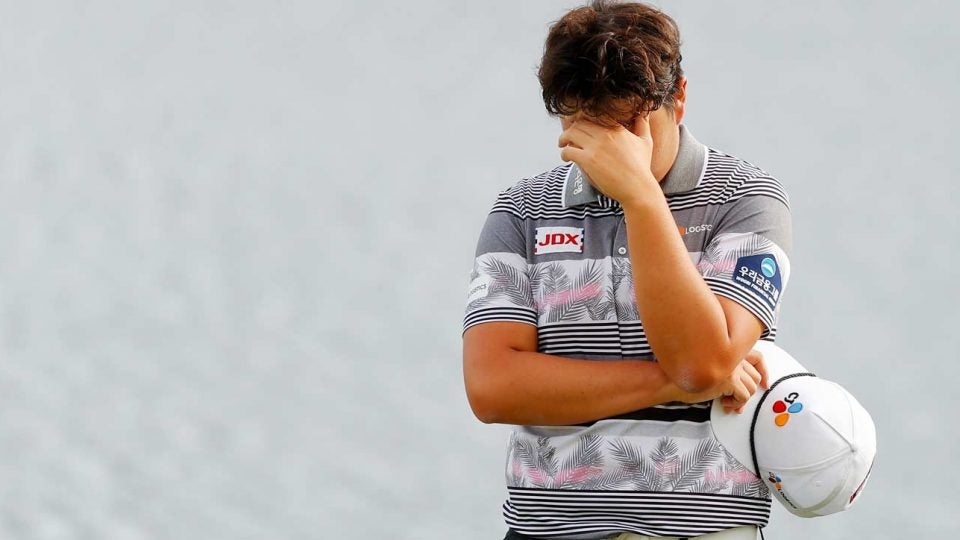 Welcome to Players Week, where the best golfers in the world will battle against one of its more confounding courses, finishing with three holes you’d do well to play with one sleeve of balls. We expect wreckage, carnage, drama. Oh, and we now expect it to be the easiest tournament on the Florida Swing, too.

Before we look ahead to the PGA Tour schedule’s crown jewel, let’s take a peek back at the weekend that was, because what a weekend it was! The play at Bay Hill was horrific and magnificent. Bryson DeChambeau said, “You had to get a little lucky out there.” Keith Mitchell described it as “almost impossible.” Here are 10 stats illustrating how it all went down.

(Note: a bunch of these were lifted from or inspired by the magnificent Twitter feed of the 15th Club’s Justin Ray, who is a highly recommended follow.)

1. Check out this weekend-only leaderboard.

I played Division III golf in college, and 143 would generally get you in contention for a 36-hole title. Not usually the case on Tour, but here’s your Saturday-Sunday leaderboard:

That honor belonged to Matthew Fitzpatrick, who shot a shiny 69 on Sunday, the low round of the weekend and the lone number in the 60s from Saturday and Sunday. Until this week, the Honda Classic had the fewest full-field event weekend rounds in the 60s this season with 30. Yikes!

Rob Oppenheim fired 83-83. Wyndham Clark shot 82-80. On Saturday and Sunday, 11 players posted a combined 13 rounds in the 80s. The best of those worst was Patrick Reed, who finished T15 after rebounding for an 80-71 weekend.

Brooks Koepka had some colorful ways to describe his career-worst Saturday 81. Matt Wolff’s 81 was his worst ever, too. Same with Clark’s 82 and Oppenheim’s 83. Truly a week to remember for those four record-setters.

And moved from T4 to solo 3rd. That’s right, hitting a third of the greens in regulation was nearly enough to win Im the golf tournament. Oh, and he led the field by hitting 11 of 14 fairways — the greens were just that hard to hold.

6. …but nobody was hitting very many greens, anyway.

On Sunday, nobody hit more greens than Rory McIlroy, who hit 13 of 18 (and shot 76). For the week, players hit the green at just a 50.5% clip, the lowest percentage on Tour since the 2008 Open Championship, per the PGA Tour’s Sean Martin (for a non-major, you have to go back to the 2005 Canadian Open).

When paired together, firm greens and long rough make it very difficult to hit the greens from the rough. Approach shots from the rough finished an average of 54 feet, 4 inches from the hole, hands-down the highest number of any course thus far this season.

Friday’s scoring average was over 74, the first round since 2012 that Bay Hill had played so hard. Matt Every was the poster boy for struggling towards the weekend; he’d opened with a 7-under 65 and followed that with a second-round 83. That tied him for the highest second-round score for a first-round leader in the last 15 years and also gave him the dubious honor of missing the cut as an outright first-round leader, becoming the first player to do so since Camilo Villegas at the 2013 Honda Classic (The Florida Swing, I’m tellin’ ya!).

9. …and then things got much harder.

On Saturday, just one single player (Max Homa) broke par with a glistening 2-under 70. The field averaged 75.9, the highest such round at Bay Hill since 1983 — and the first round with zero scores in the 60s since the final round in 1980, when the wind chill fell into the mid-teens. Like Hatton, Dave Eichelberger (wearing panty hose to stay warm) closed with a round of 74. The field averaged 79.1 that day. Brr.

During Sunday’s final round, things got much easier — the field averaged 75.1. Hatton admitted he thought he’d lost his lead, only to discover after a scoreboard glance at 14 that he was up by multiple shots. Nice surprise.

This isn’t a statistic so much as a story, but Gooch does mention scores, and money, which is stats-y enough for us.

The dictionary example of “golf” should be this. @maxhoma23 was the only round under par today. It was an incredible round of golf and possibly the most exceptional putting display I’ve ever witnessed. Oh and he 3 putted the last from 3ft for double bogey. Golf.

Also another great example. Max said he’d give me $20 if I was under par through 3 holes. First three holes brutal and long with this wind. I somehow started birdie birdie. Then chipped a ball on the third into the water from 25 yards and made double. I didn’t win $20. Golf.

Gooch shot 72-71 on the weekend, tied for the lowest score over the final 36. Maybe there’s something to be said for having a sense of humor about it all.