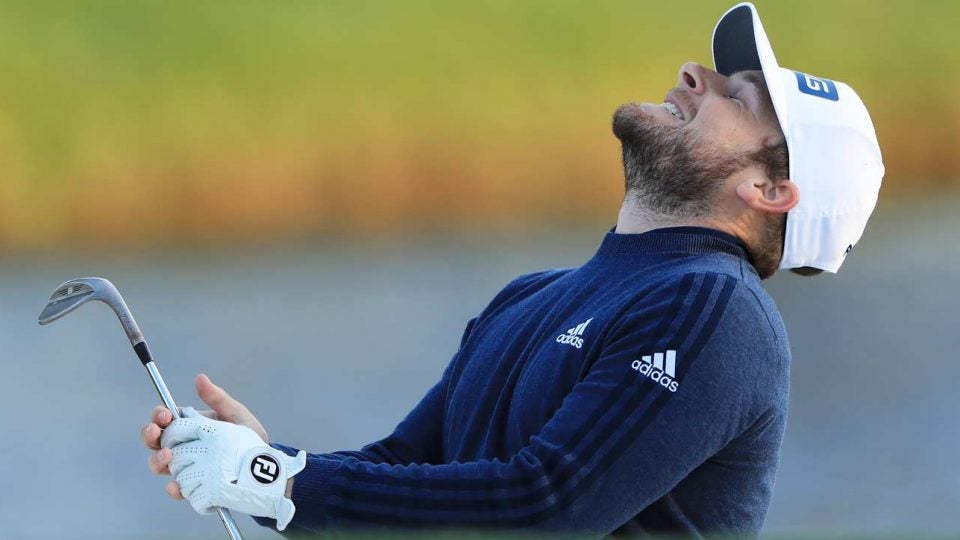 “He’s nice to everyone but himself,” Feherty said.

Everyone but himself and several inanimate objects, perhaps. Hatton exemplifies “fiery player” in the sense that his reactions to golf shots typically range from “just found out his hair is on fire” to “just stepped on a pile of burning coals.” On Sunday, he unveiled several other moves including “mimicking a shotgun” and “flipping off a lake” — and those were both on one hole, No. 11, where he made double bogey to tumble from the lead.

“We had 193 and I hit a 5-iron at my target and the wind just completely dropped,” Hatton said. “So that kind of went against us on that hole and I was just having a little moan, like it’s the grass’s fault and the wind’s fault. It’s never my fault.”

But then, to borrow from Happy Gilmore, we saw a new Tyrrell Hatton. Arguably the most important stroke of his day came on a curling six-footer to save double bogey on No. 11. He locked it up from there, closing with seven consecutive pars on a grueling day at Bay Hill to claim his first PGA Tour win.

After the round, Hatton credited his win to keeping a just-cool-enough head.

“The setup was extremely tough,” he said. “And I said yesterday the hardest thing for me will be to manage myself. And over the course of this week I feel like I did a decent job of that.”

He credited caddie Mick Donaghy with helping him leave the crooked number in the rearview and and splitting the fairway with a 320-yard tee shot on No. 12.

“He was really good. Obviously, he just told me to kind of get focused again, it’s done, move on, and have a few practice swings and just kind of get some good feelings again. And I stood on the 12th tee and that was probably one of the best tee shots, certainly, that I hit today.”

News
Tour Confidential: How much of a red flag is Tiger Woods’ latest setback?

Weekend conditions were as tough as any PGA Tour event in recent memory, with just two players under par over the final 36 holes. “It was really tough out there and obviously I was getting frustrated at times, but nowhere near the blowups that I am capable of,” Hatton said. “And after the double on 11, which was pretty tough to take, I feel like I could easily have blown up after that, and managed to kind of keep my head a little bit, although I did get a bit frustrated. That’s always going to happen with me. And as long as it’s not kind of keeping on over to the next shot, then I’ll be okay.”

Again, we’re grading on a curve here, giving credit to the composure of a golfer who completed some sort of freak-out grand slam mid-afternoon on Sunday. But a combination of experience and managed expectations were just enough to eke out a one-shot victory over Marc Leishman.

“I guess it just comes with experience. This is my third year on the PGA Tour, my seventh season on the European Tour. You get yourself in, if you play well enough, you give yourself opportunities, and I guess you learn things, and I guess I was a little bit more comfortable out there today. Also, this is only my second event back from wrist surgery. So it might sound daft, but my expectations maybe aren’t as high as they would be in a middle of the season if I had been playing quite a bit. But this is still kind of part of the comeback for me, and maybe that helped.”

“That’s probably a good thing to say, actually. Yeah, like I’m a shy person, but I feel like I’ll be, I’m nice but obviously I give myself a hard time and that’s one thing that I should probably get better at.”

Maybe a trophy will help.