Tournament of Champions: 3 things to know after Round 2 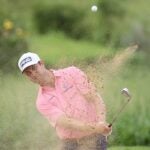 Harris English hits a shot on Friday out of a bunker on the 14th hole at the Plantation Course at Kapalua.

The leader started last season ranked No. 369 in the world. The leader had lost his PGA Tour card and had just conditional status. “I mean, it sucks playing bad, there’s no way around it,” he said. “I mean, all the guys out here work really hard and put the time in and when you’re putting a lot of the work in and you’re not getting the results out, that’s when it hurts the most. You feel lost and you don’t know what you’re doing.” The leader has found it. The leader knows what he’s doing. Here are three things you need to know after Friday’s second round of the Tournament of Champions at the Plantation Course at Kapalua.

Harris English, after losing his Tour card, finished tied for third, tied for sixth, tied for 33rd, tied for fourth and fifth in his next five events. When the Tour returned from its three-month hiatus last year, he played in nine events and missed just one cut, finishing the season with a tie for 12th at the Tour Championship.

He’s now leading the TOC by two shots after two rounds. English shot a bogey-free, six-under 67 on Friday, one day after a 65 that put him in a tie for the lead with Justin Thomas.

“I feel like I played really solid today, just didn’t hole as many putts as I did the first round, but played solid,” English said. “… And I felt like I drove the ball really well and hit a lot of greens in regulation, which I think is a huge key out here and just seeing if I can get some more putts to go. But I feel like if I keep shooting six under every day, it’s going to be a good score at the end of the week.”

Justin Thomas is tied for second

Four players were tied for second, two shots behind English.

Thomas struggled off the tee, hitting nine of 15 fairways, and played even par on the back nine on his way to a four-under 69. Tied with Thomas were Ryan Palmer, Collin Morikawa and Daniel Berger. Morikawa and Berger, who faced off in a playoff in the Tour’s first tournament after its hiatus, each shot eight-under 65s, tied for the low round of the day.

Also shooting 65 was world No. 1 Dustin Johnson, and he is now four shots behind the leader, along with Bryson DeChambeau, Jon Rahm, Patrick Cantlay, Scottie Scheffler, Joaquin Niemann and Carlos Ortiz.