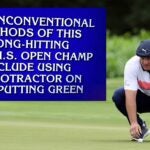 Bryson DeChambeau will have to do more to get recognized by the Jeopardy! crowd, apparently.

It is, of course, an honor to be an answer — or is it a question? — on Jeopardy!, but what happens when none of the contestants respond correctly? Does that make it any less an honor? To be well-known, but not that well-known?

The answer to that is, of course, no. Being a part of Jeopardy! means you’ve made it, whether or not the contestants are golf fanatics. So rest easy, Bryson DeChambeau.

Golf’s scientist was an answer during the first half of Thursday’s episode — one of the last episodes to feature longtime host Alex Trebek. In the category “Jocks,” here reads the $1,000 clue: “The unconventional methods of this long-hitting U.S. Open champ include using a protractor on the putting green.”

Not one of the three contestants even wagered a guess. “This golfer’s name is Bryson DeChambeau,” Trebek said. Thankfully, Golf Digest‘s Christopher Powers was watching.

While the trivia game often calls for a high intellect and knowledge of many subjects, there is no prerequisite for golf fandom. As our Alan Bastable deeply researched, golf figures have appeared frequently in this show’s history, and not always to the delight of contestants. The worst showing, perhaps, took place earlier this fall when a golf legend was the answer to Final Jeopardy:

“On Forbes’ 2020 list of highest-paid athletes, at age 50 this active individual sportsman is the oldest”

While one contestant came close, none of them answered correctly in time. It’s a shame none of us were on the show that day. We would have surely known about Phil Mickelson’s rank among the highest paid in sports. Unsurprisingly, Lefty had fun with it.