Tournament of Champions: Harris English wins in a playoff to snap a drought and 3 things to know 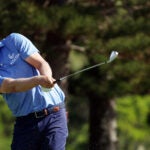 Harris English hits his tee shot on Sunday on the 2nd hole at the Plantation Course at Kapalua.

His lead had disappeared on Sunday. Not all that long ago, so had he. No wins since 2013. No PGA Tour card after the 2019 season. A world ranking of 369. Lost. And found. Harris English, behind a 6-foot birdie putt on the first hole of a playoff with Joaquin Niemann, wins the Tournament of Champions. Here are three things you need to know after the final round at the Plantation Course at Kapalua.

Harris English wins in a playoff

English, after entering the fourth round tied for the lead, played his front nine at even par, while Niemann, who started the day five back, birdied 2, 3, 5, 6, 8 and 9 for a six-under nine-hole blitz that helped pull him into the lead. English then rallied, much like he did with his career.

Birdies on 11, 12, 13 and 15. Then, after his bogey on 16 gave Niemann a one-stroke lead, a birdie on 18. On that final hole, Niemann missed a 7-foot birdie putt that would have wound up as the winner, and English missed a 10-footer for eagle that would have won it. Niemann finished with a nine-under 64, the day’s low round, while English shot a four-under 69.

On the first playoff hole, played on the par-5 18th, both players missed the green on their second shots before English was able to make birdie from just short of the green on his third shot, while Niemann could not from left of the green. English’s 6-foot putt for the win caps a run where he made 18 of 20 cuts in the 2019-20 season, and five of six cuts so far during the current season.

“It feels amazing,” English said. “All the hard work that has gone into this, all the highs and lows of golf that it brings over a career, and I feel like I’ve gotten out of my valley and getting back to the tournaments and some of the quality of golf that I know I can play. And it feels great to have some validation out there on the golf course.”

Justin Thomas, who apologized after Saturday’s third round after using a homophobic slur during it, shot a seven-under 66 and missed the playoff by a stroke.

Xander Schauffele tied for fifth, four shots out of the playoff.

Among other players, Bryson DeChambeau and Jon Rahm tied for seventh. DeChambeau shot a seven-under 66, with his five birdies and one eagle coming over the final 10 holes, and Rahm a six-under 66.