Tour Confidential: Which player has the most to prove at the U.S. Open? 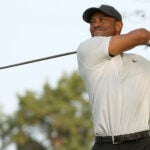 Tiger Woods hits a tee shot during a practice round at Winged Foot on Wednesday.

The U.S. Open is (finally) upon us. The first round begins Thursday morning at Winged Foot Golf Club in Mamaroneck, N.Y. Of the 144 players in the field, who has the most to prove and why?

Sean Zak, senior editor (@sean_zak): I’ll argue Bryson DeChambeau has the most to prove. His new game helped him finish in the top 10 at Harding Park, but that felt like just another Tour track. Does it work at Winged Foot? Does it fail epically? Does he throttle down ever? Getting into contention again will only increase the number of believers.

Michael Bamberger, senior writer: I would say Tiger. He could be spent, emotionally, after that Masters win last year. This course is made for him, actually: distance control with irons, greenside pitches as needed, make the 8-footers to keep hope alive. These next two days, and maybe four, will give us a glimpse not only of his golf, but his head.

Alan Bastable, executive editor (@alan_bastable): Yeah, Tiger. Or Rory, or Jordan, or … I’m gonna cheat and say Mike Davis and the USGA. If there were ever a week for the blue coats to beat their chests and wrest control back from cranky players, this is that week. Winged Foot is one of those just-add-water Open courses, and with cool, mostly sunny weather on tap, Davis & Co. should be able to have absolute control over the course, presenting the field with a tough, fair, old-school-Open test. No matter who ends up in contention on Sunday, you already get the sense that the course, and the USGA, will be one of the big winners this week.

Josh Sens, senior writer (@JoshSens): Hard as it might be to argue that a man who just won $15 million has something to prove, I’ll do it anyway. DJ comes in as the hottest player in the game and the Vegas favorite, but he’s still trailed by questions about his ability to close in the majors. He’s got 23 wins on Tour, but he’d surely trade a handful of those for another U.S. Open. Without a win for him this week, the yeah-but talk around him will continue as the dominant player who too often hasn’t gotten it done when it matters most.

Nick Piastowski, senior editor (@nickpia): Tiger. The clock is ticking. The number of majors he can theoretically compete in is winding down. On a side note, it may take Tiger being in contention to wrest away the sports fan’s attention this weekend with the smorgasbord of events going on.

Dylan Dethier, senior writer (@dylan_dethier): The only answer is Dustin Johnson. He’s playing spectacular golf. This course seems ideally-suited to his game. His career would be radically changed by another victory. Time to see if he can deliver!