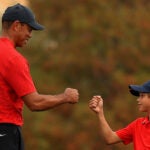 Tiger Woods and his son, Charlie, fist-bump Sunday on the 18th hole at the PNC Championship.

Check in every week for the unfiltered opinions of our writers and editors as they break down the hottest topics in the sport, and join the conversation by tweeting us @golf_com. This week, we discuss Tiger and Charlie Woods, the LPGA Tour’s CME Group Tour Championship, golf movies and more.

1. The Tiger and Charlie Woods Open, formerly known as the PNC Championship, is in the books. Justin Thomas and his PGA professional father, Mike, prevailed, but Tiger and 11-year-old Charlie stole the show. From the forward tees, Charlie, at times, carried his dad, while Dad, at times, carried Charlie with words of encouragement. What’s your main takeaway from watching Tiger in action with his son?

Michael Bamberger, senior writer: Tiger as a father. He doesn’t baby the kid. He respects him. He’s there, but he’s not all over him. How refreshing in this era of helicopter parenting.

Dylan Dethier, senior writer (@dylan_dethier): I’m with Michael. When Tiger Woods was 11, he’d already had a competitive golf career that exceeds most full-grown adults, so I think when he sees Charlie, he sees a real person. That makes their interactions more fun to watch.

James Colgan, assistant editor (@jamescolgan26): We’ve benefitted so much from Tiger Woods, the golfer, that it felt almost unfair to benefit from the awesomeness of Tiger Woods, the dad, this weekend. Still, what a unique and special memory the Woods family elected to share with the world.

Sean Zak, senior editor (@sean_zak): That golf is their thing. A lot of sons and fathers have their thing they do together. It’s one of their favorite things to do together. All the smiles, all the time. Warming stuff in this cold season.

2. It was easy to get swept up in all the Tiger-Charlie hoopla, but the fact remains that this was our first extended look as Tiger in the role of father. Which individual moment most sticks with you from the week?

Bamberger: How nervous Tiger was when he talked to reporters after the Thursday pro-am round. It told me the stakes were high for him. He needed the week to go well, and there are no guarantees, of course.

Dethier: From the same interview: Tiger was asked an awkwardly phrased question about what’s on Charlie’s bedroom wall, searching for a comparison to Tiger’s poster about Jack’s major championship record. Tiger bristled. Playing in the tournament was one thing; talking about it was more of a tightrope walk.

Bamberger: Well said, Dylan. Tiger knows what it’s like to have your childhood bedroom exposed for the world to see.

Colgan: Tiger talked a bit Sunday about building a “little world” with Charlie in Orlando, away from the noise. It struck me that, in more ways than one, that’s been Charlie’s entire life.

Zak: The reaction to Charlie’s first eagle. Everyone remembers their first eagle. I’d guess Tiger does. Charlie won’t forget his.

3. With all the attention on Team Woods, it was easy to forget that 19 other intriguing tandems were in the field. Which other duo did you most enjoy watching?

Bamberger: Every last one of them, but to answer the question, I’ll go with Lee and Daniel Trevino. Trevino at 81 seems to have every shot. Daniel’s swing is loaded with speed and modern style. Lee’s love of shotmaking shows up every time he’s over the ball. By his own admission, he wasn’t always the most engaged father. He’s engaged with Daniel.

Dethier: Matt Kuchar’s son, Cameron, is only two years older than Charlie Woods, but he was sweet-swinging his way through the weekend.

Colgan: How about Jackie Langer, who stepped into action alongside her father after a back injury to her brother Jack and contended admirably? Count me on the Cameron Kuchar wagon, too.

Zak: Can they just trot out all these teams again next year? And the year after that? To be honest, the son I’m most anxious to see play big events is Lil John Daly. That swing is fun.

4. The PNC is always a reminder that competitive family golf is a blast to watch. Would you endorse a new national championship — i.e., one conducted by the USGA — that pits two-man/woman teams of family members?

Bamberger: No, I don’t think so. Too contrived. But this event works so well. I love how it hands the game down. Imagine what it will mean to Charlie Woods, decades from now, that he got putting tips at age 11 from 85-year-old Gary Player, who knew Hogan and Jones and Sarazen.

Dethier: The Tiger Effect extends to the Champions Tour, as it turns out. Turns out all this event needed was a little injection of Tiger-Charlie eyeballs to get that much more compelling. Suddenly the swagger of Team Daly, the father-son contrast of Team O’Meara, and the rising star of Cameron Kuchar were all on display. The stakes felt about right, though.

Colgan: I loved the PNC, but anything more than the past few days wouldn’t do justice to parents or children.

Zak: I could get behind it! Why not? There are parent-child events in golf associations across the country — why not blow it out?

5. Top-ranked Jin Young Ko capped the LPGA season with a dominating five-under back nine to win the CME Group Tour Championship and the money title (despite playing in only four events.) This comes after an entertaining U.S. Women’s Open, and also in the wake of encouraging news for 2021: The LPGA has 34 official tournaments on the schedule, including two new events, and a record $76.45 million in purse money. What are your hopes for the women’s game this coming season?

Bamberger: Totally completely bullish. The starting point is to get to know the players. That’s our job. Not ours alone, but it is our job.

Dethier: My hope is that the game’s most compelling players play consistently well in the biggest events. Sunday’s CME was a good example: Jin Young Ko outflanking a leaderboard of Sei Young Kim, Georgia Hall, Hannah Green, Lexi Thompson, Lydia Ko and Brooke Henderson is the sort of thing that helps build connection between viewer and player. (The same holds true for the men’s game, of course!)

Colgan: The schedule news was great, but it’s not quite enough. The key to growing purses over time (and my biggest hope for the coming season) is to give the women’s game the exposure it deserves. Some of the weight falls on the players to translate exposure into ratings juice, but much of it falls on the television partners to put the women’s game in a position for success.

Zak: More progress, more TV time, more money, more recognition. Even more pageviews, on this very website! More of everything. More of Mel Reid kicking journalists’ asses … and winning tournaments, too. More people on Twitter freaking out about Lexi Thompson’s athleticism in her swing. More appreciation for these ultra-smooth swings that deliver the clubhead better than anyone else on the planet. More of everything.

6. According to Rotten Tomatoes’ users (and as sleuthed out by our Josh Sens), the highest-rated golf film of all time is Dead Solid Perfect. Does the popular vote have it right?

Bamberger: Wow. That was some list of bad movies. The best golf movie I know is the rerun of the ‘77 British Open, fourth round, known as the Duel in the Sun.

Dethier: Still never seen it, but I promise I will! Caddyshack is the most important golf movie. To dodge the question: Red Oak is a TV show, nobody saw it and it’s more about tennis than golf, but it’s pretty clever.

Colgan: Dead Solid Perfect came out dead-solid nine years before I was born and I dead-solid had to google the movie to learn even that much about it. I’m all for the classics, but perhaps the story here is a rounding error by the good folks at Rotten Tomatoes.

Zak: I’m a sucker for rom-coms so I’ll look no further than Tin Cup … ever.